HomeHomeTaub: The Good, Bad, Unknown from the Isles’ First Half
HomeTakes Tuesday night marked the 42nd game of the 2019-20 season for the New York Islanders, the proverbial halfway point of the year. And once again, they find themselves in a position that many — based on their predictions before the season — didn’t think they would be: One of the top teams in the Eastern Conference.

Head coach Barry Trotz’s troops hold a record of 27-12-3, good enough to be slotted in second place in the heavily-competitive Metropolitan Division and fourth in the NHL in points. After Tuesday’s overtime victory over the New Jersey Devils, the Isles also stand just three wins behind the rival Capitals for the most wins by any team in the NHL. Regardless of the record, there have been several things that should have caught everyone’s eye.

We will start with the good, beginning with Mathew Barzal.

Barzal, who’s about to head to St. Louis in a few weeks for his second consecutive All-Star Game, has been as advertised. There’s been a few off games for the 22-year-old, but he still has been the Isles’ most important offensive player. Barzal leads the team in goals (16), assists (19) and points (35). He’s been a lot more decisive with the puck in the first half as well. One reason why is his knack of being willing to shoot.

“He’s shooting the puck way better,” Trotz told reporters earlier this year. “We talked about it last year, sort of being a dual-threat and not always a pass-first guy. He changed a lot of things this summer and that was one of them.”

Last season, Barzal only scored 18 goals on 179 shots, resulting in a low shooting percentage of 10.1%. In the first portion of this season, he’s within striking distance of surpassing his goal total from a year ago and his shooting percentage is at 16.8%, tops for any forward besides Ross Johnston; Johnston is at an absurd 25% despite just appearing in only 24 games.

From Barzal, we shift to Brock Nelson, Anthony Beauvillier and Casey Cizikas.

Nelson has continued his upward trajectory after his best season as a pro last year. Thus far, the Warroad native has also justified g.m. Lou Lamoriello’s faith in him after he re-signed him for six years last May. Nelson is second behind Barzal for the team lead in goals with 15 and is currently on pace to notch the first 30-goal season of his career. He also has become an even better two-way centerman and gotten a lot more responsibility against the opponents’ best offensive players in games.

Beauvillier came into this year needing to bounce back from an underwhelming campaign last season. He’s still struggled to find consistency, but make no mistake, he’s been really solid all year long. With 23 points in 42 games, Beauvillier is fourth on the club in points. Beyond the points, Beauvillier has shown more confidence in his abilities, not including taking his shot at actress Anna Kendrick. No, Beau has provided his underrated skill and speed to an Isles squad that lacks much in that department.

“I know he’s got some great potential,” teammate Derick Brassard said at the beginning of the season. “He’s still a young guy. He’s trying to improve every day. That’s the one thing that I noticed. He competes hard, and he’s got a really good shot. He’s got all the tools to become a really solid player.”

Man, we call go all day talking about just how valuable Cizikas is this year. It can be argued he’s team’s MVP behind Barzal, and rightfully so. After scoring an unprecedented 20 goals last year, he’s already found the back of the net nine times through 42 games. Cizikas has continued to anchor the fourth line and its moving parts when Matt Martin got hurt early on and since Cal Clutterbuck went down last month. He’s also been the club’s best penalty killer and has three shorthanded goals, tying him for the league lead in that category with four others.

Getting to the defense and goaltending, it’s been business as usual.

Following their structure and footsteps from last season, the Islanders are again one of the stingiest teams in the NHL. They’re tied for second in goals allowed with 107, in the top ten in goals allowed per game, and fourth overall in team save percentage. Adam Pelech, before suffering his an unfortunate season-ending injury last week, was having a fantastic campaign. He and Ryan Pulock were continuing to trend upwards as one of the league’s most undervalued duos. Johnny Boychuk has been a rock on the blue line again, not even showing a sliver that he’s 35-years-old. On top of that, Nick Leddy, Devon Toews, and Scott Mayfield have also been solid and had good moments.

Semyon Varlamov and Thomas Greiss have done the job in between the pipes. Even with his recent struggles, Greiss still has posted 12 wins in 20 starts and has a sustainable .919 save percentage. His counterpart, Varlamov, has re-established himself as one of the best goalies in the sport.

Despite being snubbed from the All-Star Game for the Penguins’ Tristan Jarry, Varlamov has exceeded expectations and superseded last year’s Vezina finalist, Robin Lehner, in ways many thought wouldn’t be possible. He definitely has made a case to be the team’s MVP.

Before transitioning to the bad, some of the other good through the chunk of the year:

-The emergence of Ross Johnston

Now we get to the bad, and its been more of the same and some surprises.

offense — though slightly improved, has been hard to come by.

Currently, the Isles rank 25th in goals (117) and 21st in goals per game at 2.80. A lot of inconsistency from key offensive guys have attributed to that. Jordan Eberle, who was hurt for over a month and finally scored his first goal in 11 games on Tuesday, hasn’t found that level that he was on from the postseason last April. Sitting on just four goals and 14 assists, his first-half might be one to forget. The same can be said for captain Anders Lee. Lee does have 13 goals and 25 points so far, but those goals have come more in bursts and that’s been about it.

Past Lee, Brassard, Josh Bailey and the rest of the forwards have been alright but need to produce more. The Islanders also have only received a goal or goals from bottom-six forwards in 12 games this season. Compare that to last season when the bottom-six compiled 68 total goals, this year hasn’t cut it.

Other unfortunate trends that happened in the first half were the Isles playing down to their competition and lack of power plays.

There have been a number of games against lower-tier opponents that the Islanders did not come away with two points, the total opposite of last year when they dominated teams low in the standings. The losses to Los Angeles, Anaheim twice, San Jose, New Jersey and Chicago all were rough to watch. They also reinforce the fact that, even though the Islanders are one of the better teams in the league now, no opponent should be taken lightly.

I don’t know if it’s the refs having a vendetta or something else, but receiving a power play in any game this year for this team feels like a miracle. The Islanders have been on the man-advantage an unfathomable 94 times. They’ve scored on 18 times of those opportunities to have a conversion rate 19.1%, but the second-worst team — the Ducks — have received 118 power plays. That’s 28 more! It’s lunacy that power plays have been this hard to come by this season. Just ask Barzal, the guy who’s taken sticks to the face, been speared and everything else under the sun, only to realize he’s not getting the benefit of the doubt.

This was not called a high stick. SMH. pic.twitter.com/DeyIjFSfsc

These two young guys, supposedly future pieces of the foundation built by Trotz and Lamoriello, we don’t have a full grasp on. Dal Colle has shown flashes that he could be a serviceable bottom-six presence — look at his shift on Tom Kuhnhackl’s tying goal late in regulation last game — but he’s still struggling to show that punch that made him a top-five pick years ago. He’s only produced six points in 31 games, hardly something to write home about.

It’s just hard to see where Dal Colle fits in this lineup especially with a sporadic offense. Trotz has tried him throughout the lineup so far but establishing a primary spot has still been a problem for Dal Colle individually.

We all know Dobson should have been in Bridgeport tearing apart that league, but he’s stayed all season and proved why he deserved it. It’s been written countless times already that Pelech’s injury opens up the door for him to make an impact at this level. The question which remains with Dobson is we don’t know what he truly is yet. Defense is the hardest position to learn in hockey for a rookie, and he’s just dipping his feet in now — getting the start in four consecutive games — after playing in just 11 games before that. And as a 20-year-old rookie — who is going to have highs and lows, people need to remember that — the talent is there and hopefully will be on full display moving forward.

So there you have it. That’s the first half in a nutshell for the New York Islanders. What will the second half hold? We’ll know very soon.

Four years ago tonight, Christopher Gibson and Thomas Hickey send the #Isles to the playoffs for a second straight season coming back from 3-1 to win in OT 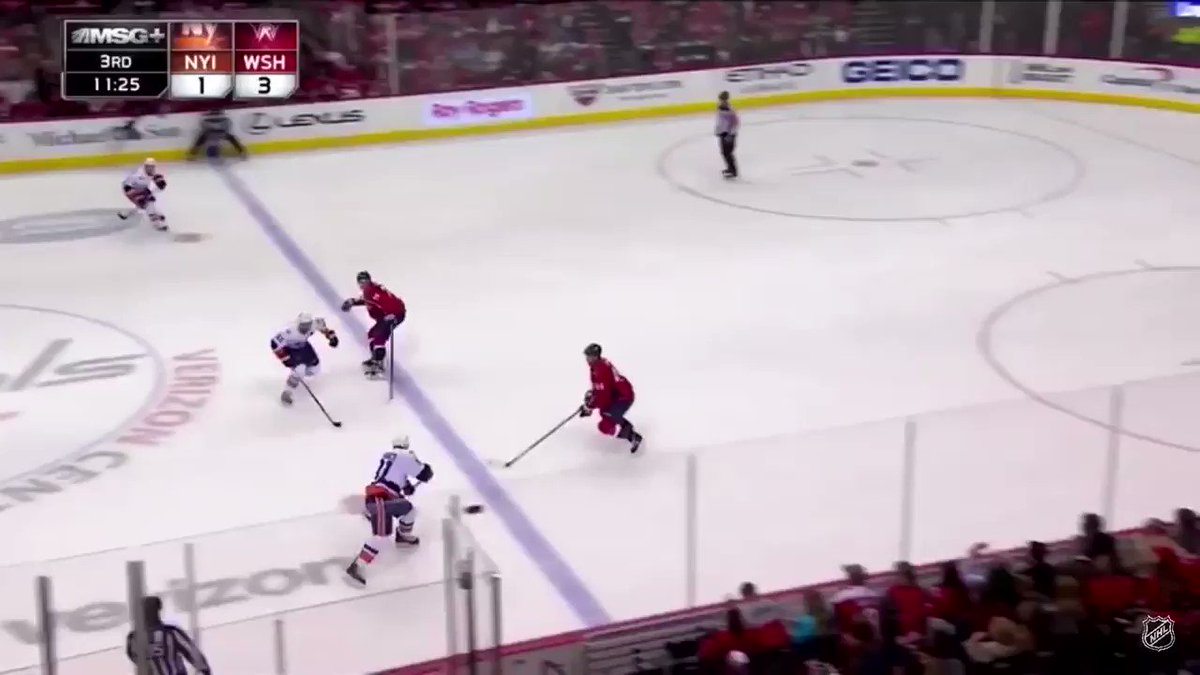 Andy Greene: “Oh, yeah, for sure, in my mind, I’m definitely going to play next season.” #Isles #NJDevils

During this time, he's out here helping an even more important team - those truly in need right now. ❤️ 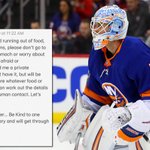