Home / Home / Brasqo: Allow Me To Introduce You To Uncle Leo Komarov 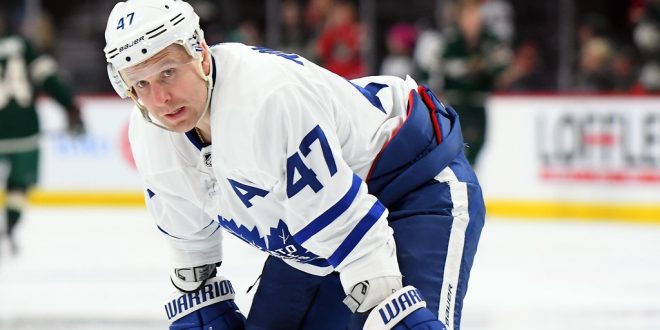 Brasqo: Allow Me To Introduce You To Uncle Leo Komarov

Danny C August 22, 2018 Home, Takes, Uncategorized Comments Off on Brasqo: Allow Me To Introduce You To Uncle Leo Komarov 1,965 Views

I’ll spare you the responses from the majority of people who inhabit hash-tag “Isles” on Twitter – but if you’ve participated at some-point, you can use your imagination on what was said when word got out about the signing.

If that imagination of yours contained various four-letter expletives, and questioned the intelligence of the Islanders new General Manager – you’d be pretty accurate.

But hear me out Islanders Faithful…Allow me to introduce you to my Uncle Leo Komarov.

First, let’s get a little background on the new Islanders left-hand shooting center-man. And an interesting background it certainly is.

Leo Komarov was originally drafted by the Maple Leafs in the sixth round, 180th overall at the 2006 NHL Entry Draft. Leo would go on to captain the Finnish World Juniors squad in 2007, and would move on to play with Dynamo Moscow of the KHL in the 2009-2010 season.

Yes – Leo was born to Russian parents in Narva. At that point in time (1987), Narva was a part of the Estonian SSR of the Soviet Union. When Leo was 5 years old, his father would score a job with a Finnish hockey team – so the Komarov’s would pack up and move to a Swedish-speaking part of Finland (my head hurts) in a town called Nykarleby. Leo is officially the first Estonia-born player ever to put on a National Hockey League sweater. Another fun fact – Leo can speak multiple languages; Russian, English, Swedish, and Finnish.

Ok – picking back up.

In 2011, Komarov would proceed to help team Finland win the gold at the IIHF Worlds.

Finally, in May of 2012, Leo would come to an agreement with the Toronto Maple Leafs for a one-year deal worth $1.2 million.

After only one season with the Leafs in the big-show, Komarov elected to bolt back to the KHL, to play once again for Dynamo Moscow – but with the intention of someday returning to North America to play for the Leafs again someday.

Needless to say, Leo’s thought-process is exhausting, and hurts my brain. But, to his credit –  it did work out for his pocket-book.

promise and subsequently inked a four-year deal worth $2.9 million-per, with the same Toronto Maple Leafs.

You see that correctly. Leo’s deal was for almost $3m per, four years ago. If there’s a positive to be had in the contract that the Isles negotiated with him – he was only given an average of $100,000 yearly raise for his services. In NHL standards, that’s not exactly “breaking the bank” to say the least.

Taking a look over at CapFriendly.com – you’ll see his current payment breakdown.

The only real difference from his last one with Toronto, is all of his money was evenly distributed. No signing bonuses and no “move” clauses present.

In an era where “no trade clauses” are king – in the event the Islanders would like to deal Leo at some point, he needs to submit a list of seven teams that New York cannot deal with.

Other than that, again – the AAV increase is minimal. If he were to play out his contract with the Islanders – Leo would be bringing home an extra $200,000 overall from his previous contract.

Yes, again – this would be the “silver-lining” way of looking at a $3m a year, quintessential role-player whose offensive production hasn’t exactly been stellar throughout his career.

Last season, in 74 games played, Leo put up a not-so-impressive 7 goals, 12 assists,  for 19 points. This would put him in line with the offensive production of guys like winger Zack Kassian in Edmonton, Luke Glendening in Detroit – along with the Islanders own, defenseman Adam Pelech and winger Cal Clutterbuck… To add insult to injury, all of those guys mentioned (with the exception of Clutterbuck – ugh) are making sub-$2 million per year.

There’s certainly something to be said about that, especially with the

direction that the league is going. Teams are continually focusing more on speed and puck skill, rather than what Komarov has an abundance of – grit, character, and intangibles.

Just like Valtteri Filppula, he fills a giant need.

Dead horse – consider yourself beaten, but I just can’t let it go…

With the current state of the team after the JT fiasco, and the fact that Barry Trotz is traditionally very hands-on with the personnel he wants for his system – it’s really hard for me to hate this move.

I want to hate it – I really do… The stats are overwhelming evidence that I should absolutely despise this transaction. I mean, you pay a guy with Leo’s rating this kind of money in EA Sports NHL 19 – that would be virtual career suicide.

I guess this goes back to the trust that I have for hockey guys of the caliber of a Lou Lamoriello and Barry Trotz.

As I mentioned in a previous article regarding the acquisition of Valtteri Filppula,  there’s something to be said about what the culture and the locker-room must have been like, for Barry and Lou to insist on bringing in yet another “character” guy, in Komarov.

Barry, Lou, and Company have been doing nothing but reviewing tape and evaluating their roster since they were brought into the Islanders organization. And both “hall-of-famers” feel that there was something vastly off with the way this team was built.

Stating the obvious – the Isles defensive side of the puck was a complete disaster last year. The penalty kill was as bad as it’s ever been.

Let me backup and clarify that I’m saying this with EXTREME caution. In

my thirty-plus years following this franchise, I’ve been burned a couple (hundreds?) of times.. But I’m one of the few that doesn’t think this Islanders team is going to be a basement dweller this year.

No, I’m not unreasonable to think in it’s current state – they’re going to be competing for the Cup. There’s obviously alot of religious ceremonies to be performed, and stars to be aligned for that to be a possibility. The question-marks for this team – in it’s current state, pre-training camp – are staggering at this point in time.

There’s a thought throughout the National League that “you cannot have enough character guys on a team”. And in that department – the Islanders are cornering the market.  Where they may now be lacking somewhat in speed and puck-skill, they’ll now throw grit and work-ethic at opposing teams.

With guys like Clutterbuck, Boychuk, Filppula, Komarov, and a returning Matt Martin – I don’t want to ever hear that this team lacks any character for the foreseeable future.

Contrary to popular belief – I feel that even with the loss of their captain, they’ll still be able to put the puck in the net on a pretty regular rate. As Barry Trotz has stated numerous times – the hardest aspect for a team to have in the NHL – is the the ability to score goals consistently. The Isles still have that.

Granted, they’ve lost a big chunk. But look at the offensive part of a team like the Nashville Predators. They didn’t have a single guy over 65 points (Filip Forsberg had 64), and their high goal-scorer didn’t crack the 30-goal mark (Viktor Arvidsson had 29).

They would score by committee. They have a defensive system in place that maximizes their abilities. And their goaltending is in the elite category.

Looks like the Islanders are indeed attempting to go in that direction. Alot of work admittedly needs to be done to get there, but signs are pointing toward that being the route Trotz and Lou are taking.

Danny C Brasqo || A 30-plus year hockey fan who insists on acting like he knows what he's talking about. || Follow my ramblings and/or trash me on Twitter -> @brasqo || Or don't...
@brasqo
Previous PTIsles: Episode 50 – Preview SZN w/ Brian Compton
Next Bellows Ready To Breakthrough