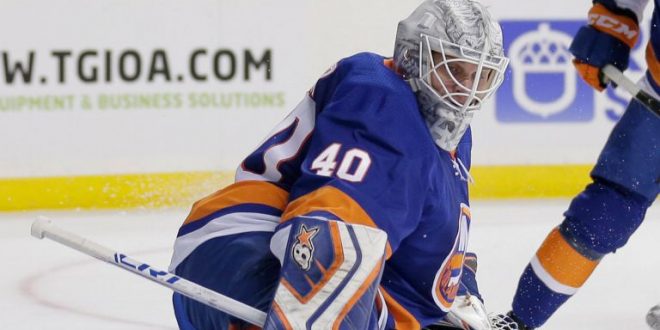 Brasqo: And, We’re Off – Isles Look To Progress

And, we’re off – both figuratively, and well, literally.

With a good four day chunk of off-time for the boys in blue and orange, the team looks to build upon what it’s established.

Three games into the season…

Correct, enough time really hasn’t passed to completely get a hold of what the make-up of this team is quite yet. I’m pretty confident we all can agree on that.

However, if you’ve watch any of the games that this team has played within the past twelve-years, you’re bound to notice some subtle (or not so subtle) differences.

Let’s go ahead and put aside the player personnel for the time being. You can rest assure this is by-no-means a finished product. Both Barry Trotz and Lou Lamoriello have all but erected a billboard stating such.

With the season just starting, as hard as it may be for the most seasoned Islanders fan – they deserve the benefit of the doubt in that regard.

No false flags were flown to provide the fan-base with anything other than this process being an “always moving 5-year plan”. Lamoriello has been diligent in being realistic with any immediate expectations, and frankly – when was the last time this franchise has had that?!

As stated previously, fans should welcome that with open arms.

The organization on the ice. The structure that just, wasn’t there.

Trotz’ system is in full effect, and even with the probable sub-par personnel implementing it on the ice – it’s working.

The players have bought in.

Granted, Barry Trotz and his resume are not one to accept anything other than a complete commitment. But to actually see it transpire in the first three games, it’s – impressive to say the least.

You can see the players, at times, second guessing their decisions on the ice. That unfortunately comes with the territory when a new system is implemented. We cannot forget that this Isles team truly is a “pot-luck” of NHL systems within it’s player make-up. So they’re all starting from square one.

Not one of these guys have played under Trotz.

Barry’s showing his trust in some of the less-experienced players on the squad.

In an interview with TheAthletic’s Arthur Staple, Barry Trotz would comment on a couple of his young defenders:

“We just have to trust with those young guys. You think of Ryan [Pulock] with the shot, he’s a big, strong man. And with Adam [Pelech], he’s got range. A great stick. His hands are probably better than I thought they were. He’s got some poise with the puck.”

What About The Kids?

While receiving some (alot of) backlash from Islanders fans throughout social-media, Trotz decided it best to

allow further development for some of the youngsters. This would include playing a Luca Sbisa over a fresh-faced Devon Toews… Favoring a Komarov/Filppula/Kuhnhackl sandwich rather than the rosy-cheeked Kieffer Bellows.

A collected and calculated Lou Lamoriello would comment regarding the sorest of player subjects among fans, or lack there-of – the 24 year-old defenseman, Devon Toews:

“What you do in these situations is give yourself flexibility…We’ve got four centers pretty well set and [Devon] Toews is a young player who has the ability (to go to Bridgeport without waivers). It’s not going to hurt him at all.”

Translation being, the kid has plenty of time. Let’s get him some top-four minutes in the American League, and when he’s up to speed and can easily slot in – let’s give him a look.

No, not something even the casual fan wants to hear when you’re watching a Sbisa or a Mayfield taking his spot. But as our defense is currently situated – Leddy, Boychuk, Pelech and Pulock are the Isles top-four.

The ‘Tenders Came To Play

Straying from that sore subject – how about them goalies?!

Greiss had a solid start in game one, but unfortunately couldn’t perform the encore in his second go of it.

Fresh off of penning that touching and heart-wrenching article for TheAthletic regarding his struggles with addiction, wouldn’t you know it – Robin goes ahead and posts a 35-save shutout in his Islanders debut.

Besides the obvious, he was noticeably more compact and had less movement as compared to his wind-milling days in Buffalo.  It would be safe to associate this as a product of the former Toronto Marlies goaltending coach, Piero Greco, and current Isles goalie-guru, Mitch Korn –  as per the overall improvements their previous proteges have shown.

A Work In Progress, But The Progress Is Working

This upcoming stretch of games is sure to give the club a solid and lengthy time to get their bonding in with games of “Snarples” and class-room sessions galore. But fret not, the progress is showing.

The Isles currently sit with a perfect penalty kill going 8 for 8 over the first three games. I don’t think I need to go into detail how abysmal the PK has been over the past couple of seasons.

The Isles newly minted Captain, Anders Lee, has embraced his new role as the teams new leader. Unknown to some, Anders previously wore the “C” for his collegiate alma mater, Notre Dame. So the responsibility isn’t quite a new one for the power forward.

I consistently playfully refer to Valterri Filppula as an “Isles legend”. But in reality, he’s been solid for the club. He’s apparently been “as advertised” with his locker-room presence and availability to the younger players. And, well, he’s currently the team’s leading goal contributor. Not too shabby for a guy that the majority of critics tortured Lamoriello for even considering.

The Jan Kovar experiment has already run it’s course as the 28-year old Czech forward and the Islanders have mutually agreed to part ways. I can’t say that I’m too surprised, since the recent influx of KHL talent has been very hit-or-miss. Kovar’s mediocre skating and inability to adapt to a smaller ice surface during the preseason would suggest he would more than likely be in the “miss” category. A 2-million dollar experiment that should cause no issue for the salary cap in the long run.

The blue and orange are in Nashville for a rematch against the Preds this coming Saturday. Then the boys are off to the west coast for 3 games in 4 nights versus the Kings, Ducks, and Sharks respectively.

A true test upcoming to see where they are at with the understanding of Trotz’ new methods.

Danny C Brasqo || A 30-plus year hockey fan who insists on acting like he knows what he's talking about. || Follow my ramblings and/or trash me on Twitter -> @brasqo || Or don't...
@brasqo
Previous PTIsles: Episode 53 – So Far, So Good
Next Isle Remember: Aucoin Speaks Highly of Time With the Islanders

PTIsles: Episode 53 – So Far, So Good
Isle Remember: Aucoin Speaks Highly of Time With the Islanders