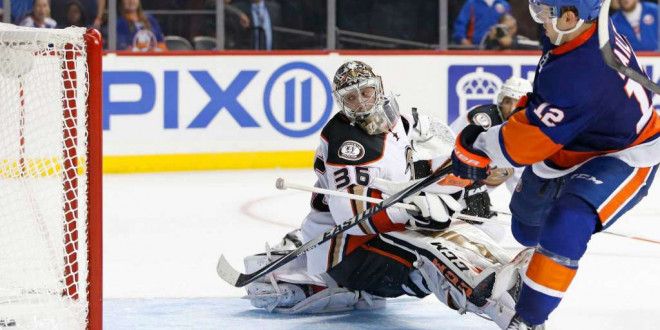 Eating crow does not usually taste this good. But for Islanders fans far and wide, the overtime winner in Sunday’s home opener was almost certainly the filet mignon of crow-eating moments. That’s because the second shift of the extra period saw fans’ emotions span the entire range of the Josh Bailey spectrum, from “Thank God, Bailey wasn’t in on the first line,” to “Oh, crap, here comes Bailey” and finally to “Holy crap, there goes Bailey!”

And it wasn’t just that Bailey scored the game winner over the now 0-3 Anaheim (formerly mighty) Ducks and in so doing ended the Islanders (very early) season-long losing streak. It was that Bailey did so while also scoring perhaps the prettiest goal of his career.

Bailey’s late game heroics aside, it was an uneven night for the Islanders. There were stretches, for example during the first period when the Isles outshot the Ducks 16 to 3, that they seemed to dominate. And it was especially good to see the stalwart captain, John Tavares, end his scoring slump on a bizarre play where he appeared to get assisted by a broken-sticked Cal Clutterbuck. It’s hard to overrate how vital getting Tavares going will be to the Isles this year, especially given the lack of clarity as to where the production will come from on the Islanders’ seemingly ever changing lower lines.

But the Islanders also took five penalties, three of which came in the second period and kept the Islanders from developing much of a rhythm despite playing with a lead. The Islanders also suffered a crucial mental lapse midway through the third period when they gave a goal back to the Ducks just 31 seconds after Tavares’s aforementioned first goal of the season had put the Isles ahead 2-0. Jaroslav Halak, who after being mostly untested in the first period had played admirably for the second and third periods, also gave up a softie to the Ducks shortly after the visitors pulled their goalie and dangerously left him pulled for a neutral zone face-off at center ice. The move paid off, as the Ducks silenced the sold-out crowd and tied the game with exactly a minute left in regulation. And last but not least, the Islanders lost Casey Cizikas midway through the third period with a leg injury of uncertain severity. The loss of Cizikas for extended time would be tough to swallow; he has been one of the best players for the Islanders in the early going, with his play helping to energize the fourth line in spite of the offseason departure of Matt Martin (who, in unrelated news, looked pretty uncomfortable while dancing with Zdeno Chara Saturday night, presumably because Martin still isn’t used to the way the Maple Leaf looks on his shirt and not because he feared for his life). Rookie Anthony Beauvillier filled in for Cizikas on the fourth line after Cizikas left, but with Shane Prince on I.R. and the Islanders willing to try Beauvillier on the wing, it is worth wondering whether a prolonged absence for Cizikas would trigger a harder look at Mathew Barzal, who the Islanders seem hesitant to shift out of his natural spot at center.

On a night of highs and lows, perhaps the perfect representation of the unevenness of the home opener was the way the team handled Daniel Bryan’s first appearance at an Islanders game (and apparently his first hockey game ever). While Bryan’s enthusiasm was unbridled and his presence long overdue, he was inexplicably not shown on the jumbotron after the team scored its first goal (which also gave the Islanders their first lead of the season). Instead, Bryan’s first “Yes!” chant was offered to mockingly answer whether he thought a fan would be able to answer a commercial-break trivia question. In addition to later being given a misfiring t-shirt cannon, when Bryan finally did lead the team with a post-goal “Yes!”, he was shown on the jumbotron during the music that precedes the chant, leading to a mix of confused celebration. All that being said, it was great to see the team embracing Bryan’s folk-hero status and his presence will hopefully be repeated throughout the year. Far more important than any minute mishaps, the Islanders are now undefeated while playing with Bryan in the audience. As tonight’s hero Josh Bailey fittingly said in his post game interview, “we’ll take it.”