Besides Mat Barzal there is really nothing to be excited about at this point in the season for the Islanders. A 3rd straight losing month as the Islanders went 4-6-2 bringing the last 3 months total to 14-21-5. There was a glimmer of hope on February 9th, as the Islanders trailed 5-2 late in the game, Clutterbuck drew a questionable 5 min major and the Islanders somehow managed to score 4 goals during it and led 6-5 with 1:49. In classic Islander fashion they blew the lead using the same stand around defense that continues to blow lead after lead, but after our best player Barzal made an unreal pass in OT to help Brock finish off the hat trick the hope was this was the turning point the team needed. It wasn’t to be as the Islanders promptly lost the next 2 games and only 2 miracle shutouts allowing an incredible 95 shots resulted in the only 2 wins in the final 8 games of the month ending in a pitiful loss in Montreal 3-1.

Some of the numbers during the month:

Even with the obvious signs this team was not a playoff team Snow decided to basically stand pat and make 2 minor deals and to compound his mistake he decided to give Bailey 30 million for the next 6 years even though his play has significantly regressed in 2018. When your best move during the month is dumping Chimera that’s not exactly turning you into GM of the year. The argument that “well this helps keep John Tavares” makes no sense. If that’s the case wait till JT resigns first before you make this move because Bailey has proven without JT he isn’t even a half point per game player and now if he walks you locked up 6m per year in a guy who is at best a 3rd line player. Consider the following:

Over the past 5 seasons, here are the numbers for Bailey and Tavares with and without each other and granted each season isn’t a full 81 games together or not, but the majority of the last 2 seasons Bailey has played with JT and the 3 prior they did not.

3 seasons prior without Bailey 1.01 pts per game

3 seasons prior without Tavares 0.48 pts per game

So basically we just locked up a player who if Tavares leaves is at best a 35-40 pts a year player.  I am not buying the “hometown discount” argument as certainly the rest of the league knows about everything above, I think Bailey was smart and knew he wasn’t going to get 7m+ a year. 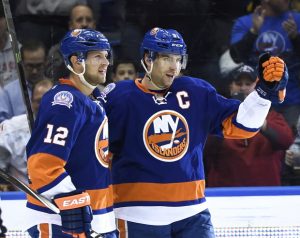 At this point it’s clear this team needs a new direction, the GM down to all the coaches need to be gone and we need a new voice and direction leading this team. I think most fans at this point are hoping JT resigns and Snow goes. I don’t really see any draw for Tavares other than the fact Barzal gives him the 1-2 punch that many successful teams have. If Tavares leaves and ownership doesn’t fire Snow you have to wonder what exactly they are seeing. Honestly with how bad this team has fallen apart the last 3 months you have to wonder why nothing has been done.

Honestly this season can’t end fast enough. Besides Barzal, this entire season is a SELL.  My big fear is they put together a garbage run at the end that gives them an excuse to not shake things up. That would be the worst thing that could happen.

What’s on tap for March – a brutal home loss to Montreal, followed by a 4 game road trip and then back to back with the Capitals which should be the final nails in the coffin in this highly disappointing season.