Last month I said that the Islanders needed at least 18 points to stay in the race, they were able to capture 15 points going 7-5-1 in 13 games which put them 1 point behind Toronto entering into March. While the Islanders have been clearly better under Weight, there were some alarming games during February. A complete no show in Ottawa losing 3-0, a 7-1 blowout in Toronto, and ending the month on a hideous note, getting blown out in Columbus 7-0. An occasional bad game is ok, but 3 in a month is an ominous sign for a team hoping to make the playoffs. They simply can’t afford to do that with all the teams in the Wild Card race. On a positive note we were able to defeat the Rangers at home and a shocking 3-0 shutout win in Montreal. At this point it’s tough to predict how this team will play in March. The overall month was simply ok which makes the Islanders a hold at this point. 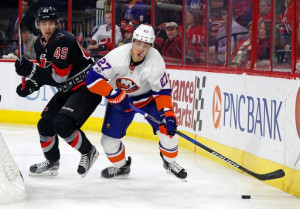 Anders clearly has had the biggest turnaround during the season. He led the team in points this month with 12, led the team with 5 power play points and was the co-leader in goals at 6. During the last 3 months he has scored 18 goals and has 31 points over 38 games. You have to wonder what Capuano was thinking (not much) the first 2 months of the season playing him less than 13 minutes a game when he clearly has become THE top scoring threat after JT. He needs to have a big final month plus if the Islanders hope to be successful. 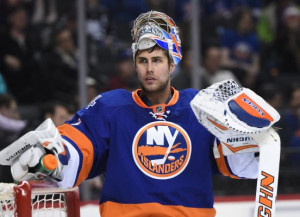 After singing his praises last month I have to call a spade a spade, Greiss was downright horrible this month. The Islanders are fortunate to have gotten the points they did considering his play. Coming into the month Greiss had a GAA of 2.24 and a SV PCT of .928, but during the month he allowed over 3 goals a game and had a brutal save percentage of .891. You can’t have that out of your goalie play and expect to win games, granted the 2 stinkers previously mentioned play into these numbers, but he simply needs to be better. 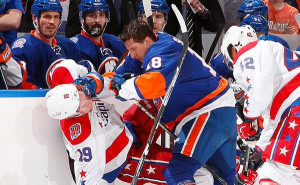 I would imagine one of the players most excited with the coaching change is Ryan Strome and he has rewarded Weight with improved play. 4 goals and 10 points in 13 games is more of what we hoped we would see out of Strome. Sometimes a reset can be exactly what a player needs and let’s hope that’s the case here. Seeing his scoring rate more than double during February as compared to the first 4 months of the season, he’s off to a good start.
Johnny Boychuk: BUY 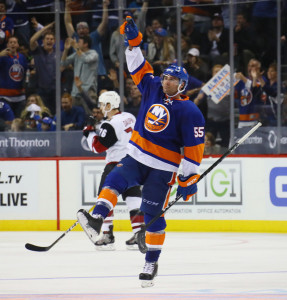 I haven’t written at all about Boychuk this year and with good reason. I certainly have been concerned with his drop off in play, definitely not worthy of a 7yr, 42 million contract he received especially considering he still has 5 years to go on the contract, but he finally put together a decent month. While it still frustrates me to see him try the “shot/pass” move he did have the 2nd most shots during the month and it was nice to see him contribute 6 helpers during the month and going a team leading +7 during the month. With Hamonic out the entire month it was critical he step up and he did. We need some of those Johnny Rockets to go in the net in March. Keep Shooting! 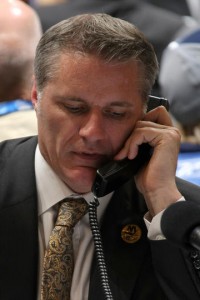 The trade deadline came and went and once again the Islanders did nothing to improve themselves. For a team we keep hearing wanting to make the next step all that Snow has done at the last 2 trade deadlines is acquire Shane Prince. Obviously I do not know what’s going behind the scenes or what other teams are asking for in return, but I am a little dumbfounded that he did nothing this year. However unlikely it is that the Islanders come out of the loaded Metropolitan Division, you still would like to have seen him do something, even rent Thomas Vanek (yes Thomas Vanek) who was absolutely dominant with JT in long island and would make this team better. We heard all the talk about Duchene, but did any Islander fan actually think we would get him? I certainly didn’t. Even with Halak playing well at Bridgeport, he couldn’t even deal him for anything. If you don’t want to overpay for assets fine, I understand that, but then at least sell off some considering the best they can hope for is playing the loaded Capitals in Round 1. The fact he did nothing is highly disappointing. Maybe it’s a sign the owners put the brakes on and he will be gone come summertime…

What’s on tap for January:
A ridiculously brutal schedule. A 6 game road trip to start the month which will probably go a long way in determining whether the Islanders are really in the playoff race or not. 14 games in 26 days is absolutely absurd and only 6 home games out of 16 during the month. A home and home with the Hurricanes mid-month and a date with the Rangers at the garden on the 22nd. 22 being a key number as the islanders will need at least that many to stay in the race and head into April with at least 90 points.

Previous Many Roads to the Wild Card
Next The Islanders Did Nothing, And That’s OK

Many Roads to the Wild Card
The Islanders Did Nothing, And That’s OK