The Islanders had a so-so month going 7-6-1, it could have been a lot worse had it not been for the strong finish (3-0-1). Greiss continued his strong play and definitely stole a game vs Tampa on the 28th. (When is the last time a backup goalie did that for the Islanders?) The special teams were brutal in November, as the bad habits of standing around on the PK and too many passes on the PP returned. The PK was a dismal 75% and the PP was just as bad at 11.9% during November. Hard to win with those kind of special team numbers. Islander country has more reason for concern as the Devils, Capitals and Rangers all look to be improved this year and you still can’t count out the Penguins. The Islanders need to play a lot better than .500 if they want to make the playoffs. 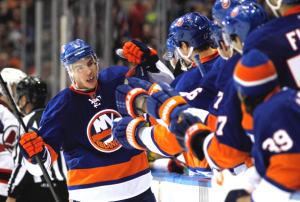 Word came out in November that Travis Hamonic had requested a trade to be closer to his family for personal reasons. The class act that he is, he turned in a solid month, with 4 points, a +6 rating and only taking 1 minor penalty the entire month. It would have been real easy for him to take more penalties out of frustration; instead Travis showed himself to be the consummate professional that he is. We would all hate to see him go, but we hope everything can work out for Hamonic and the Islanders. We wish him and his family all the best. 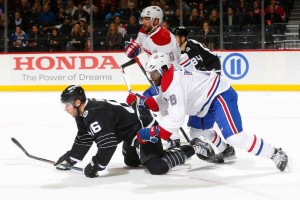 You have to wonder why the NHL would schedule all 3 games vs the Canadiens in November. The Islanders slump continued versus the Habs losing all 3 games for the 2nd consecutive year. It becomes even more frustrating considering 2 of the games had “Montreal typical” calls or lack of them late in close games. With the Islanders trailing by a goal at home P.K. Subban punches Nelson in the face with over a minute left, not surprisingly nothing was called. In a tie game 2 nights later, Beck bumps into Price with less than 4 minutes to go in a tie game and he goes down like a ton of bricks. The Canadiens of course score on the PP and win the game. At the absolute bare minimum both penalties should have been called. How Subban gets away with stuff like that is beyond me. It’s hard enough to play Montreal but to have 2 games impacted by the refs late in those games is a tough pill to swallow. I’m glad we don’t see them for the rest of the year. 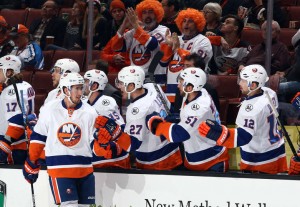 Before last year, the West Coast trip was the kiss of death. Last year it was considered a tuning point and once again this year the Islanders went out west and played 3 solid games against Los Angeles, San Jose and a down Anaheim. After a 1-3 start to the month, it could have gotten ugly quickly but the Islanders played 3 solid games and easily could have had points in all 3 games. 4 points in 3 games we will take it. 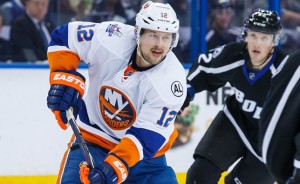 Steve Bernier scored 16 goals on a bad Devils team last year. In watching him so far this year, you have to wonder how he did that. 2 points on 12 games on a top 3 line is not getting it done. He’s been awful to say the least and Capuano finally made a change. He’s been scratched the last 3 for Strome (and how good has he been?) and 4 of the last 5. If he wants to play he’s going to have play a lot better.

Josh Bailey – I would say easily the guy who generates the most arguments among Islander fans. He was having an absolutely brutal month, no goals in the last 14 games until a lucky goal bounced off a defenseman from right in front of the net versus Florida that Arthur Staple tweeted looked like a pass (no Islander was there). His cheating on a faceoff earlier in the game cost the Islanders a goal ending with a weak play in front of the net allowing an easy tap in goal. Honestly I don’t get what the Islanders see in him, he is given opportunity after opportunity which includes top line time/power play time and his numbers are still mediocre. His last 39 regular season games he has 5 non-empty net goals and is -8. Even worse is in most of those games last year he was playing with JT. Let’s compare his career numbers to 2 ex-Islanders.

Blake Comeau – who we waived and has bounced around quite a bit STILL has more career goals with far less opportunity (92 goals in 507 games, Bailey has 86 in 500 and Comeau has about 1 min less ice time per game and approximately half the career power play time).

Michael Grabner – who could go his next 2 full seasons without a goal (95 goals in 339 games) and still have more goals in the same amount of games with a minute and a half less ice time per game and about 20% of the PP time Bailey has had. Think about that stat for a minute, Grabner could go 2 years without scoring and still have 9 more goals than Bailey. Much of Islander country complained Grabner had no hands, so where does that leave Bailey when you look at these numbers?

The occasional nice pass is not worth his inconsistent play. Capuano did finally scratch him for the Bruins game earlier in the month, but in my view if the Islanders want to make the next step it’s not with Bailey as a top 6 forward or honestly even a top 9, it’s time to cut bait. My hope is if Hamonic is traded maybe he can take Bailey with him. The fact Strome was sitting for either of these 2 guys is totally absurd, Strome’s impact has been very noticeable since he has been back (and yes I understand Strome could be sent down, but I was not a fan of the move).

What’s on tap for December: Starts out with the Rangers in Brooklyn (finally!), 13 games in total with only 1 back to back and no 3 games in 4 nights so the Islanders need to take advantage.