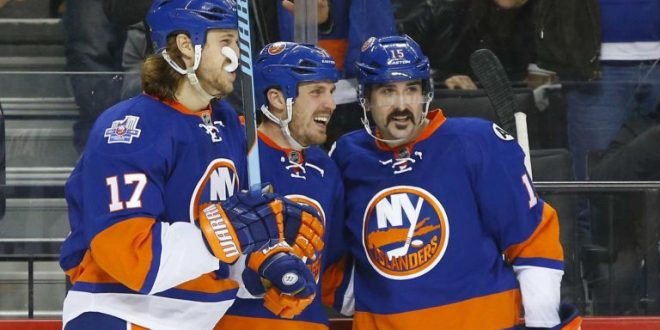 Cal Clutterbuck Back to Sparking Islanders

Although it’s come in an extremely small sample size, New York Islanders third-line forward Cal Clutterbuck has appeared to re-embrace the physical, agitational play he built his career on, which in turn reignited the rest of his game.

Clutterbuck seemed to abandon his hallmark, “do something” attitude in favor of Doug Weight‘s seemingly more offensive-minded approach for his veteran forward. In a January article from the New York Post, Weight alluded to these foundational changes.

“If they’re not doing things right in the game, they’re going to sit. That’s what it was last year. And we have a lot of great players and a lot of good people, but we’ve got to learn,” he said. “We’ve got to play better-percentage hockey as far as how we play, the right way, more often than we were. That’s why we’re losing. We can figure it out. We’re a smart group.”

As was evidenced by Clutterbuck’s 18-points-in-76-games 2017-18 season and lackluster — to say the least — second half to the year (no goals, three assists, -11 plus-minus through his final 37 games), that could have been (Narrator: “it was”) the wrong route to take with such a lynchpin type of player.

In the Welland, Ontario native’s second season with New York, 2014-15, Clutterbuck had 343 hits, a career-high, playing alongside fellow “do something” brethren, Matt Martin. The following season, Martin’s last with the Islanders before moving on to Toronto, Clutter racked up another 288 hits to go with his 15 goals and a +7 plus-minus rating.

Clutterbuck was always able to provide a spark, even without agitating or delivering a big hit. But around the midway point last year, he seemed to lose his ability to even do that. With a new sheriff in town in Lou Lamoriello, and a battle-tested deputy in Barry Trotz calling the on-ice shots, the 12-year NHL veteran appears to have regained some of his fire this year.

Through just three games this season back alongside Martin and Casey Cizikas, Cal Clutterbuck has seen an average of 13-and-a-half (13:31) minutes of ice time and has been in the middle of some very exciting plays.

He’s delivered nine hits so far, blocked three shots, logged four takeaways, and has propelled the Islanders to an NHL-best 100 percent penalty-kill percentage, tied with the Coyotes, Lightning, and Penguins.

Clearly, good things are happening when Clutterbuck, Martin, and Cizikas are on the ice. They were the best third-line in hockey, right? It appears as if we’re going to get a reunion tour complete with multiple-song encores this year. I’m all for it.