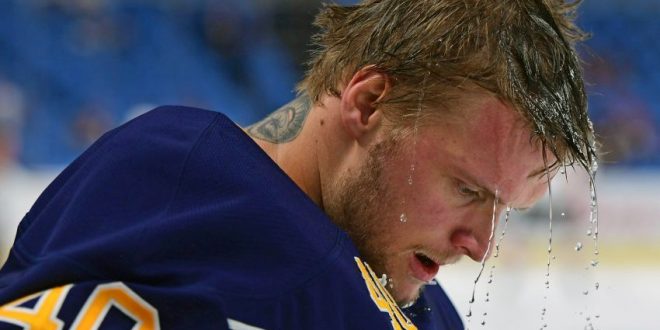 At six-foot four inches, 245 pounds…Athletic, flexible, and super competitive. The “new” prototypical goaltender attributes that any general manager would salivate over.

Only 27 years old,  he possesses these dream characteristics. Let’s get to know Robin Lehner.

Robin might have been born to become a goalie, but it wasn’t until age 10 that Robin decided he wanted to pursue it. Oddly enough, before then, Robin hadn’t shown much interest in the sport of hockey. He didn’t even possess his own pair of skates, let alone goalie equipment. When that faithful decision was made to pursue “life as a goaltender”, Robin’s father, Michael, was there to provide and push the will to obtain both the physical and mental toughness to succeed. Michael Lehner has served as a goaltending coach in the Swedish Elite League and the KHL from 2006-2011 respectively. Father Michael was notably the goalie coach for Team Belarus in the 2016 World Championships, and was even Henrik Lundqvist’s tending coach when he was with Sweden’s Frolunda franchise, before Henrik would join the Rangers.

Before the 2009 draft, TSN quoted European Scouting as comparing Lehner to Henrik Lundqvist – ”Robin looks pretty similar to Henrik Lundqvist. He makes himself look very big in the net and there is not much room to shoot at. He challenges shooters pretty well and his lower net butterfly coverage is good….Lehner is a big goalie already, but is very agile. He will have to work on rebound and puck control and mental toughness to take his game to the next level.”

Regarding his Scouting Combine performance, TSN would further report “While a lot of players put in a great deal of effort, perhaps none was more conspicuous than goaltender Robin Lehner (top-ranked European goaltender), on the Wingate cycle test, grunting like an animal as he maxed out his effort, before nearly collapsing off the bike altogether when he finished.“

He was pegged early on as a top-flight prospect that had all the tools to be successful in the National League.

March 29th 2010 marked the signing of a three-year entry level contract with the Ottawa Senators.

Ironically, on January 13th 2011, Lehner would post his first career NHL win versus the New York Islanders when the Senators provided a 6 goal effort for the young goalie.

Robin was quickly taking advantage of any opportunity the Senators gave him, and he kept proving that he belonged in the NHL. Observers throughout the league began to take notice…Fast-forward to the 2013-2014 season, where he finally became a full-time NHLer for the Senators, backing up Craig Anderson. Grumblings would quickly begin to surface within the city of Ottawa in regards to whether or not they should make the giant Swede the full-time starter when Robin posted a 3-0 record with a 1.33 GAA and a .958 save-percentage – earning him the NHL’s First Star of the Week for the week of November 11, 2013. He received a 3 year, 2.2 million dollar payday for his efforts in the summer of 2014, and was clearly looked at as the “future” for Ottawa’s long-term goaltending needs.

Moving on to June 2015, Buffalo made the call to trade for the Swedish net-minder along with David Legwand… Lehner would bare the brunt of the work in Buffalo through his final season with the club this past season. These three years would be where his “attitude” would be on full display.

From what could be viewed as displays of discontent directly to his defense during games, fits being thrown on the bench after being pulled, to his “chip-on-his-shoulder” answers to local media inquiries. Depending on which side of the fence you reside, this could definitely be viewed as an issue internally. As someone looking from the outside, I see it as a player who wants to win, and was frustrated by his current situation.

According to Oddsshark.com, this past season, the Sabres posted the 3rd worst defensive squad throughout the entire league (no surprise the Isles were the worst), and they had the absolute worst offensive production in the league (Isles were 9th overall).

I wonder why a goalie in that situation would be frustrated?!… Ok, you got me – I don’t wonder. It’s pretty obvious.

Re-watching some of Robin’s previous post game interviews, you can hear the frustration, but more importantly you can hear the will to win. The media, doing their job – will continue to hammer home the team’s struggle – and he stayed consistent in his responses. He doesn’t toss around blame, and he accepts his responsibility to stop the puck. He’s an admitted “emotional” player. In numerous interviews he’s admitted that he needs to improve that part of his game. A change of scenery and culture could (and should) definitely help with that.

I’m admittedly a little confused on how a player being invested in his team enough to be upset and frustrated by its results can be really viewed as an overwhelming negative – unless it truly is affecting his play. His stats, while playing for pretty bad teams overall, would support that it isn’t the case. There hasn’t been any reports that I was able to dig up that would suggest that Lehner was a poor teammate. He was viewed as one of the elder statesman on those Sabres teams, even while in his mid-twenties.

So what are the Islanders getting themselves into?

Well, I truly believe they’re getting a player who’s going to be in full “prove you wrong” mode. With only $1.5m committed to him for one year – it’s now or never for Robin if he’s looking to be a lucrative commodity in the NHL. For the Islanders, it’s a no-brainer. As the Islanders brass certainly hope – if Lehner performs, he has the opportunity to make more money, and stay longer if wanted. If he doesn’t – then no harm done as he’s only signed for a year at a basement price. Let’s see if that chip on his shoulder pays off for both Lehner and the Islanders. This is a big year for both of them.

Watching Lehner throughout the years, evidence will show that he does have some issues with maintaining position and rebound control. But both are fixable issues. It didn’t do him any favors to have a lackluster system in front of him. Judging from what Mitch Korn has done with the numerous talent he’s worked with and what Piero Greco has done with Garret Sparks recently in Toronto (he was voted the AHL’s Most Outstanding Goalie this past year) – it wouldn’t be a shock to see Lehner crisper than ever come the upcoming season. To coincide with a new improved, Barry Trotz approved defensive scheme, results can only go up from last year.  Again – it’s super low risk for both sides. Robin gets to work with arguably the best goalie-guru in recent NHL times, and the Isles get to bank on Korn making those small adjustments to make Lehner what he was destined to do – become a premiere NHL talent.

Is it October yet?

Danny C Brasqo || A 30-plus year hockey fan who insists on acting like he knows what he's talking about. || Follow my ramblings and/or trash me on Twitter -> @brasqo || Or don't...
@brasqo
Previous PTIsles: Episode 49 – Maven’s Ravin’ w/ Stan Fischler
Next New Culture, Accountability, Captaincy, Breakout Players for the Islanders