Dunnigan: Breaking down the Best Isles Draft Picks on Their Current Roster

Ryan Dunnigan May 1, 2021 Home, Takes, The Team Comments Off on Dunnigan: Breaking down the Best Isles Draft Picks on Their Current Roster 660 Views

Thursday night kicked off the NFL’s draft weekend. The Jets selected their QB of the future — Zach Wilson — and the Giants moved back for a haul and selected a dynamic playmaker, Kadarius Toney.

With the spirit of the draft in the air, IslesBlog takes a look back on the Islanders top five draft picks on their current roster.

In many fans’ eyes Bailey has never quite lived up to the 9th overall selection. He is however, the longest tenured Islander. He has been along for all the ups and downs.

Since being selected by the Islanders he has amassed 505 points in his career which makes him a 0.55 point per game forward. At 31-years-old, Bailey is third on the team in assists and points in 2021. As frustrating as he can be it is hard to argue how important Bailey has been since being drafted.

Ryan Pulock has become one of the better defensemen in hockey since the arrival of coach Barry Trotz. As of April 27th, Pulock ranked fourth in the league for defensemen in Wins Above Replacement. 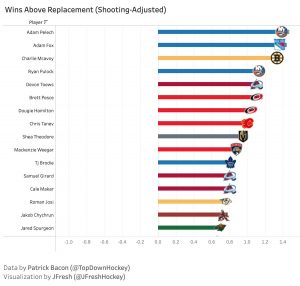 Since making the varsity back in 2017, Pulock has shown he can be dynamic on offense. Defensively he has improved leaps and bounds to now be one of the league’s very best.

Every night Trotz trusts Pulock to shut down the other team’s best players.

Mathew Barzal began his Islanders career winning the Calder Memorial Trophy. Night in and night out he’s one of hockey’s most electric players. Anytime the puck is on his stick it is must see tv.

“The kid who won the Calder” has also edged out Connor McDavid in the “Fastest Skater” All-Star Skills Competition and is just shy of averaging a point per game. Superstar Patrick Kane when asked what skill he would steal from another NHLer said, “Mat Barzal’s skating ability.” That is quite the praise from one of the league’s better skaters.

Under Trotz his two-way game has taken great strides also. Barzal has solidified himself as one of hockey’s best forwards and continues to improve.

Stealing Anders Lee in the sixth round was one of the best picks in Isles history. His season ending injury has made it abundantly clear how he is the heart and soul of the Isles. The team’s offense has sputtered and the team seems devoid of leadership.

Lee has 184 goals over his career and has developed into one of the team’s best goal scorers. Since the departure of John Tavares, Lee has taken full ownership of the captaincy.

After his injury Islanders’ general manager, Lou Lamoriello told reporters; “He’s our captain. He’s our leader on and off the ice and he’s the voice of the players with the coaches and management.”

At the top of this list is Adam Pelech.

Pelech lacks the flair of a Barzal, but he is the straw that stirs the Long Island iced tea. Last season the Isles went from contending for the top seed in the conference to out of the playoffs (in a normal season) without Pelech.

Pelech does not have the offensive prowess to match some of his peers, but his ability to lock down the league’s very best may be unmatched. One must look no further than the 2019 first round sweep of Pittsburgh to realize this, when he shutdown future Hall of Famers Sidney Crosby and Evgeni Malkin.

The Toronto native is invaluable for the Islanders and their system, thus landing him as the best Isles pick of the current roster.

Previous Greenberg: How Uncle Leo became Indispensable for the Islanders
Next Watling: Barzal’s off day hurts the Islanders with few games remaining to find momentum

Greenberg: How Uncle Leo became Indispensable for the Islanders
Watling: Barzal’s off day hurts the Islanders with few games remaining to find momentum