Home of the Islanders Sign Removed From Nassau Coliseum

The ice was removed, the banners taken down and packed away, but until yesterday, the Nassau Coliseum was still “Home of the New York Islanders” at least from the outside. 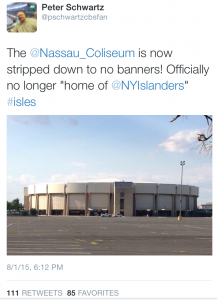 This hurts a tad more than when “Home of the New York Dragons” was taken down several years back. Even a Google Search looking for the old sign now produces undesired results. 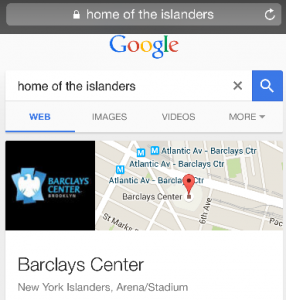 The Islanders 36 year lease with Nassau County ended on July 31st. The team and SMG, their lease partner at the Nassau Coliseum reached an agreement to pay the county $3.55 million in unpaid rent, utilities, parking, concessions and revenue payments.

Coincidentally, the “Home of the New York Islanders” sign was removed exactly 4 years after Nassau County Voters rejected a proposal to spend $400 million to overhaul the Coliseum.

The Coliseum will be “The Home of Billy Joel” on Tuesday Night, August 3rd with the average ticket price on the secondary market nearing $500 according to Forbes. The Piano Man’s send off concert will be the dilapidated arena’s last act before closing it’s doors for a $130 million renovation.

The New Coliseum is slated to open in December 2016 and host a college basketball game featuring the Kentucky Wildcats.

Previous The YES! Chant Is In EA Sports’ NHL 16
Next Ex-Islanders Defenseman Mathieu Schneider Elected to US Hockey Hall of Fame

The YES! Chant Is In EA Sports’ NHL 16
Ex-Islanders Defenseman Mathieu Schneider Elected to US Hockey Hall of Fame