Home / Home / In Lou of Changes: What Lamoriello Would Do For The Isles

In Lou of Changes: What Lamoriello Would Do For The Isles

Is the dream-come-true of Lou Lamoriello emigrating to the Islanders about to happen? And would Lou be in lieu of Garth Snow?
These are questions likely to be answered sooner rather than later based on a flock of rumors flying down from — naturally — The Commonwealth of Rumors, Toronto.

Yesterday, Sportsnet’s NHL Insider Elliotte Friedman told the NHL Network that he believes there’s an “excellent chance” that Lou Lamoriello could be bolting Toronto for the Islanders. This was just the ongoing saga of hot takes that all escalated from last Sunday, where TSN’s Bob McKenzie dropped a bomb from fellow insider Darren Dreger that over at the World Championships in Denmark, there was gossip flying around that in many NHL circles, Lamoriello to the Islanders was gaining a lot of traction.

A lot of fans, bloggers, pundits, whatever you want to call them, are now hanging on the thread that Lou will be coming to Long Island to rightfully take over as general manager or a higher-up in the hockey operations department.

And it’s funny, a couple of weeks ago I tweeted out that if Legend Lou was available, both owner Scott Malkin and co-owner Jon Ledecky should do anything in their power to bring him to the Isles in any sort of capacity. I also added the five intangibles that Lamoriello would immediately bring to an organization that after a few good seasons, find themselves again wandering in the wilderness. And I’m not just talking about the John Tavares contract dilemma. We’re talking about a G.M. (Garth Snow) who thinks his team is a Cup contender, compared to Eric Cairns (Director of Player Development) telling Andrew Gross of Newsday, the franchise is in need of everything from top to bottom. Just for fun, let’s add in the Josh Ho-Sang narrative, not having a legit number one goaltender, and to top it off, the league’s worst defense.

Your head hurting yet? Well if it is, say Lamoriello does indeed join the Islanders, all those stumbling blocks in front of the organization can be fixed. And to be clear, that’s not a homer opinion. It’s rational. 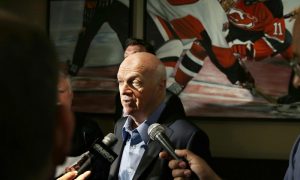 The minute Lamoriello steps in the door, the franchise will gain a whole new respect from around the league. Lamoriello has been around the game for 30-plus years and is well thought of, not just in hockey circles, but as one of the smartest people around. And yes, he might be 75 years of age, but someone with that amount of time spent as a coach, executive, advisor, etc. in the sport will quickly provide his tremendous amount of knowledge to a still green ownership and front office that more than once, has been said to not have had the most qualified people running the show for some time now. His winning pedigree — three Stanley Cups with the New Jersey Devils and construction of the rebirth of the Toronto Maple Leafs — could immediately evolve a franchise that has had minimal success over a quarter of a decade, and only has one playoff series win in 25 years to show for.

Looking past the front office, the entire culture of how the Islanders have been run would shift with Lou at the helm.

When Lamoriello was in New Jersey, he built teams that created a winning philosophy and a no-nonsense attitude for the club. The result was three Stanley Cups and over 20-plus years of playoff appearances. For an Isles team that has only made the postseason seven years since 2000, a shift in culture is desperately warranted. He would instantly bring character to a team lacking thereof and overhaul the development portion of the franchise, referring to the draft, and prospect development. Many should remember, the Islanders traded Nino Niederreiter, Griffin Reinhart, and Ryan Strome (all former first-round picks) while other than a few names, have had their draft picks have little to no impact. And here’s a thought, maybe Lou brings in those quirky rules of no facial hair and other innuendos, those would be the kind of welcomed changes the organization has been dying for. Him molding the team into the style he wants them to be and how the players represent the club would be a total refinement of what the fans are used to.

In terms of style of play, the Islanders are long overdue for a remodel.

Lamoriello’s Devils teams are remembered for perfecting the neutral zone trap and playing with a defense-first mentality. After this season, the Isles need to take back the defensive aspect of the game, and who better to install it, then the man who built his teams to play it to a tee. Even a few years ago when Lamoriello took over in Toronto, they were one of the worst defensive teams. Three years later, they’re not a top defensive club, but there was a major improvement.

Some of the other major setbacks that have plagued the Isles is accountability and execution. Lou’s arrival instantly changes that.

For a long time now, the word accountability which has been preached by the team’s hierarchy has fallen on deaf ears, both by the players and the fans. Just ask Ho-Sang. Let’s not beat around the bush, there has been a boatload of excuses and not enough alteration to change said accountability into something that can be taken seriously. Lamoriello’s hard-nosed way of running teams instantly brings about a breath of fresh air. In terms of execution, to be frank, under the Snow regime, the chance to shake up or make impact moves to shift the franchise in an upward trajectory, has been small. With Lou calling the shots, the Isles would have a better shot at finding ways of making those moves that have a lasting effect. After all, Lamoriello has made savvy moves in the past — Frederik Andersen and Patrick Marleau most recently. 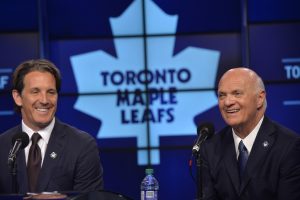 Yes, Lou had his winners and losers in both his Devils and Leafs tenures (Sorry Matt Martin). But how regarded he his in hockey circles, nothing from the Isles side of things can come close in terms of pull and legitimacy.

If we want to talk contracts, Lamoriello’s track record speaks for itself. Even if they have been so-called “hard-nosed” tactics, it’s that mentality that could change the Isles fortunes. And maybe that can start with say the likes of John Tavares or possibly Calvin de Haan if he’s in a position of power.

With how on edge the fanbase is at the moment and the number of questions surrounding the franchise, reeling in Lou Lamoriello can be the move that finally puts the Islanders in the direction they have been craving for nearly 25 years, a consistent contender and possible Cup champion. The whole landscape would evolve under Lamoriello’s watch. He would be demanding of excellence from the front office, to the coaches, all the way down to the players. The franchise needs all of that in more way than one.

Lamoriello joining the Isles would be a dream scenario. But if it becomes reality, the team will finally find itself on the right path, seeing light at the end of the tunnel.