The New York Islanders announced this morning that they’re retiring the numbers of John Tonelli and Butch Goring, solidifying their seats at the Islanders legends table.

Tonelli and Goring will become the first Isles players to have their number retired since Hall of Famer Brian Trottier received the honor back in 2001.

Under the structure of the late Bill Torrey and Al Arbour, Tonelli and Goring were key contributors to the dynasty that helped capture the franchise’ four straight Stanley Cups from 1980-1983.

Tonelli was claimed by the Islanders after his WHA club — the Houston Aeros — folded in 1978. In eight seasons on Long Island, Tonelli certified himself as one of the best wingers in the franchise’s history. He earned the honors of Second Team All-Star in 1982 and 1985. The Islanders captured their first Stanley Cup in 1980 against the Philadelphia Flyers on a game-winning goal in overtime by Bob Nystrom, which was set up by Tonelli.

“The accomplishments we achieved as a team throughout my years as a New York Islander will always be the greatest memories I have from playing the game,” Tonelli said in a press release. “To have my number retired alongside several of my former teammates is incredibly humbling and something that my family and I will cherish forever.”

Tonelli helped the Islanders win three more Cups and make a runner-up appearance in the finals in 1984, where they were dethroned by the Edmonton Oilers. Additionally, in 1986, Tonelli made an appearance in the Cup Finals with the Calgary Flames.

Tonelli is best remembered for scoring “clutch goals” for the Islanders and was dubbed the nickname “The Greasy Jet”. To culminate Tonelli’s career, in 1984, he tried out for Team Canada. Almost turning down invitation, JT went on to make the team and not only won the championship but was named the tournament’s best player, winning the 1984 Canada Cup MVP award.

Tonelli spoke with current team captain Anders Lee after the announcement was made, and in true Islander fashion, wants Lee to continue wearing 27.

Following “he who shall not be named” departure from the organization a short time ago, the timing of his number being sent to the rafters couldn’t be better.

“You see their name up there and start to hope that someday you might be able to swing with those guys,” Goring said. “For that moment to finally come for myself and John, it’s completely overwhelming. It’s been hard for me to grasp what’s happened here because it’s something that I’ve been hoping for.”

Goring spent five full seasons with the Islanders after being acquired from the Los Angelas Kings in March 1980, in exchange for Billy Harris and Dave Lewis. Regarded as the “final piece of the puzzle”, in 21 playoff games that year, Goring scored 19 points and solidified his spot as the Islanders went on to win four Stanley Cups during his tenure. Goring continued to make an impact following his first season. Fast forward to the 1981 Stanley Cup Playoffs, “Butchie” notched ten goals and ten assists in 20 playoff games which led to him being awarded the Conn Smythe Trophy and the Isles capturing their second straight title.

Best known for his signature helmet that he donned since he was 12 years old, Goring was widely regarded as having the worst fashion sense in all the league. However, he is also regarded as the originator of the NHL’s tradition of growing a beard in the Stanley Cup playoffs, commonly dubbed a “playoff beard”.

Goring turned to Twitter earlier to express his gratitude with being the latest honoree alongside Tonelli to have his number retired. 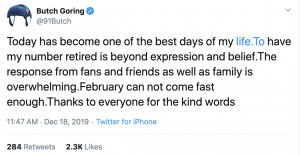 James is Co-Editor-in-Chief/writer at Islesblog and podcast host of Nassaumen Hockey Podcast. A trusted source for Islanders content for many years, James is passionate about keeping Islander fans up to date on the latest in Islanders news. Other content contributions also include senior Islanders writer on TheHockeyWriters.com. For interview requests or to provide content info, follow James on Twitter @JamesNicholsNYI
@Jamesnicholsnyi
Previous Five for Five: A Different Animal
Next Taub: Beating the Bruins Would Go A Long Way for the Isles

Five for Five: A Different Animal
Taub: Beating the Bruins Would Go A Long Way for the Isles