On Saturday 3/21, Road Ice Travels took its largest group to date to Newark, NJ to see the NY Islanders take on the host NJ Devils at The Rock.  Our group consisted of two buses of 50+ people each!  With our second consecutive sold out event, our 102 Isles fans arrived in NJ and flooded the Edison Ale House, a bar right across the street from the arena, and a bar that we instantly knew we will outgrow for next season’s events.

While it had a nice setup for a pregame location, capacity became an issue as soon as our large group rolled in, making it a bit harder to socialize as a group than we had envisioned but making for a much louder and intense set of Islanders chants.  The chants included the traditional “Let’s Go Islanders” as a response to the Devils fans’ “Let’s Go Devils” chants, as well as the newly popular “YES, YES, YES” chants and of course an anti-Rangers chant as both teams share a mutual dislike for the other local team from across the river.

Road Ice Travels had worked with the Sirius XM radio show Hockey Prime Time with host Connor McKenna to broadcast live from the bar while they interacted with our visiting group and a packed house of fans of varying loyalties.  The show was great, and a camera crew was even brought in to stream live video of the event, although the chants of the capacity crowd seemed to drown out the audio of the show at times.  We have already begun talks to work with the show going forward in a larger setting with better audio to make for an even better pregame experience for the fans!

After the pregame, our group made its way into the arena and to our seats in section 225/226 where we not only had individual seats but also the brand new Party Zone exclusively for our group.  For those who may not know, this area is new for 2014-15 and offers a ton of space including couches and tables, televisions with Play stations hooked up and ready to be played, as well as an all you can eat food area that included hot dogs, pretzels, nachos, popcorn, soda and water.  Everyone seemed to love the Party Zone and next year it has already been booked so stay tuned!!

Our group was treated to a 3-0 win by the road team NY Islanders, a game featuring a brilliant performance by goaltender Jaroslav Halak in his return from injury.  Upon completion of the game, we weren’t done just yet!  Our group was invited by the Devils onto the ice for a group photo right on center ice by the Devils logo!  Yes, they let us out there even though we were a sea of orange and blue instead of red and black.  The ice was surprisingly not slippery, likely due to how scuffed it was from the third period of action that had just taken place.  Everyone in the group was emailed the beautiful group photo a few days later, a unique experience for sure!

Road Ice Travels is already hard at work putting things in place for next season.  While the schedule is obviously not yet available and won’t be until late summer, we have started our planning process for next season earlier than last year so we can offer our customers even more unique experiences in addition to on ice group photos, raffles to sit in the penalty boxes for warmups, etc.  We can’t wait to see all of you whom we have met this season and last as well as lots of new faces going forward!

Previous IslesBlog Podcast: The Shutdown Pair, Christian Arnold and Scott Charles
Next Looks Like I Found My Favorite Rags Fan 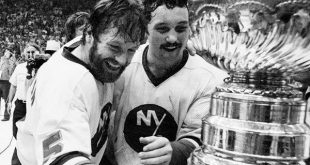 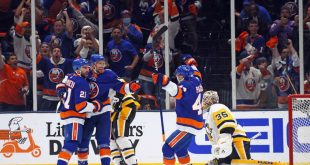 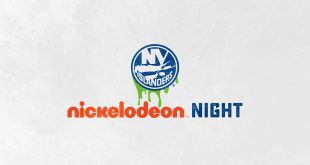 You might remember the bit of fun the NFL had when they partnered with Nickelodeon ...