News broke late Wednesday afternoon from Elliotte Friedman of SportsNet that the New York Islanders were looking to trade veteran defenseman Travis Hamonic.  This came as a huge shock to the entire Isles fan base, as not only was this the first rumors anyone had heard of such news but also the fact that the Islanders as an organization have very few leaks of information.  The reason for the Isles shopping Hamonic isn’t entirely clear, but all the same sources are reporting that it most likely is an off-ice, potentially family related issue, which caused Hamonic to ask the team for a trade even prior to the season starting.

Confirming report from @FriedgeHNIC, Travis Hamonic requested a trade prior to the start of the season. #Isles trying to accommodate.

Hamonic loves the Isles. This is personal. Wpg, Edmtn, Cgy and Van all preferred. Might expand to other west cities. Tough on Isles…. — Darren Dreger (@DarrenDreger) November 18, 2015

Shocked, angry, upset.  Those are some of the adjectives you could use to describe the reaction from fans on Twitter.  While Friedman’s original article vehemently denied that the cause was due to the Isles move to Brooklyn, that didn’t stop some in the media from stirring the proverbial pot with that rhetoric (*cough Ray Ferraro *cough).

I can’t lie, this is tough news to hear.  Travis Hamonic is a beloved Islander.  He’s one of my favorite current Islanders, and may end up being one of my favorite Islanders ever.  He’s played here his whole career, often on some awful teams, and signed a 7 year extension after the lockout before he even really hit his prime as a player. Heck, he’s still only 25 so he still may not be in his prime.  Hamonic’s family history is no secret, and became more well-known after ESPN ran this awesome special on how Travis hosts a child who has also lost a parent at every Isles home game. 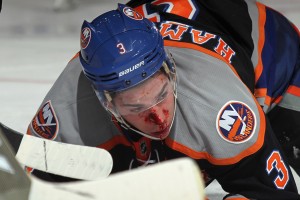 To a man, this does not seem like a player who’s just not happy here and wants out.  There’s definitely more beneath the surface of these rumors that we may truly never know. 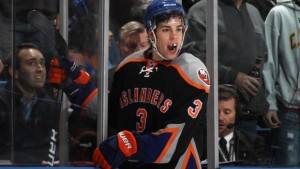 That being said, this isn’t necessarily a bad thing for the Islanders as a team.  I’m not going to propose trade options here because, well frankly, we all know how those never usually are accurate and plenty of other sites can do that.  However, if the Isles are trying to accommodate Hamonic, they can, and absolutely need to, get a premier player or two in return.  One thing is clear, this will not be a trade for prospects or draft picks.  Hamonic currently leads the Islanders with an average of 23:20 TOI, a full 1:30 more than Johnny Boychuk and Nick Leddy, and is seen across the league as a strong defender in his own zone.  The biggest asset to the Islanders is Hamonic’s extremely team friendly contract.  With 5 years remaining, Hamonic’s annual average value (AAV) is $3.85 million, which is a steal for a top 4 defenseman who only just turned 25.  One move I could definitely see Garth Snow doing is packaging Hamonic with either potential free-agent forward Kyle Okposo or Frans Nielsen, to command a much more hefty return than a typical in-season “rental” type trade of a pending UFA.  Snow has a lot of leverage with Hamonic because the Islanders don’t have to move him, but a trade would be doing him a favor.  Knowing Garth’s past trade/draft/free agency history, I highly doubt he’d get less than top dollar for Hamonic.

As Arthur Staple reported later on Wednesday, Hamonic will meet with the media on Thursday so we should know more then.  In the end, I hope that Travis is able to figure everything out and stay an Islander, but if he wants to be closer to his family in western Canada, no one can blame him.  All too often we forget about the fact that these guys are human too, and the tolls that professional sports takes on someone’s family cannot be understated.  Only time will tell how this situation will play out.

Previous Who is Alyse Barker? The Islanders New Game Day Host
Next The 5 Hole: The Price Is Wrong

Who is Alyse Barker? The Islanders New Game Day Host
The 5 Hole: The Price Is Wrong