Home / Home / John Tavares Was Only As Faithful As His Options

John Tavares Was Only As Faithful As His Options

Joseph Buono February 28, 2019 Home Comments Off on John Tavares Was Only As Faithful As His Options 502 Views

John Tavares was forced to make a decision he never thought he’d have to make.

That’s the way I see it.

From the moment he was drafted 1st overall in 2009, the NHL world assumed the clock was ticking on John Tavares’ time with the Islanders. It wasn’t a matter of if, it was a matter of when – and how. Where? It would be his hometown Toronto Maple Leafs. That part was certain.

That chatter didn’t change when he signed a six year extension and was named the franchise’s 14th Captain at age 23. It didn’t change when the Islanders posted back-to-back 100 point seasons or when he led the team to the second round of the playoffs for the first time in 23 years.

The questions were still asked and answered – usually in the same way.

“I hope to stay in Long Island,” Tavares told Newsday’s Arthur Staple in January 2018. “There’s a lot of positive things going forward with the organization and the team here. I haven’t thought about being anywhere else but with the Islanders.”

After 9 seasons on Long Island, any honest Islanders fan would acknowledge that Tavares had plenty of reasons to leave. From the arena and GM to the coach and lackluster line-mates, no one would have blamed him for choosing to pursue a Stanley Cup elsewhere.

But John Tavares kept saying otherwise. At the time, it was probably the truth.

“I think I’ve always showed my commitment, my appreciation and my desire to play on Long Island,” Tavares told Sportsnet 590’s Andrew Walker in July 2016. “I would love for that to continue for the long haul. I think you look at some of the greatest players in the game have been able to spend their entire career somewhere and I hope I’m in that same position.”

When asked specifically about playing in Toronto, Tavares responded that he would “not count on that.”

The reality is back in 2015 and 2016, the Maple Leafs were bad – very bad. Tavares wasn’t going to Toronto to be their savior and the Islanders had finally turned a corner (so we thought).

Kyle Okposo and Frans Nielsen left as free agents, Jack Capuano was fired and Doug Weight was overwhelmed in his first full season as head coach. The Islanders missed the playoffs in back to back years and #SnowMustGo billboards were erected.

Ironically, it was Islanders GM Lou Lamoriello that helped turn around the floundering original six team. After being hired by Toronto in 2016, he shed contracts, drafted Auston Matthews and traded for G Frederic Anderson. The Leafs registered 95 points and made the playoffs in 2016-17 and followed that up with a 105 season last year.

Toronto was good, young and had cap space.

The Maple Leafs were now an option and some men are only as faithful as their options.

“I just felt like my heart was in two places: where I’m from, and a place where I’ve been for a long time that helped become the man that I am today,”Tavares said on July 1. “My gut was just tearing apart, my heart was tearing apart trying to figure out what I wanted to do.” 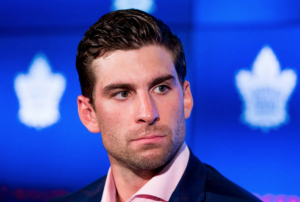 For what it’s worth, I believe him.

It came down to what he wanted to do and what he felt obligated to do.

Despite pitches from Tampa Bay, Boston, Dallas and San Jose, Toronto was truly the only place enticing enough to leave Long Island. Playing for his hometown team with a ready to contend roster complete with a superstar center and Stanley Cup winning coach.

In his Player’s Tribune article, Tavares wrote, “In no way had I made up my mind yet, as far as where I was signing, before I took those free-agency meetings. In no way.”

That was hard to believe at the time and recent reporting suggests otherwise. It’s really just semantics. Sometimes it’s difficult to make an easy decision – the decision you always knew you would make if an opportunity presented itself.

What was an unlikely option two years earlier became a chance to fulfill a childhood dream on a team ready to win now. A scenario that seemed unrealistic throughout most of his career became too tantalizing too pass up.

After saying all the ‘right things’ for so long, it was his prerogative to take as much time as he needed to summon the personal courage to move on from a loyal place, franchise and a fanbase that he, in his own way, loved.

Every good thing ends badly, otherwise, it would never end.

Tavares needed be unfaithful to the Islanders Faithful to make it happen.