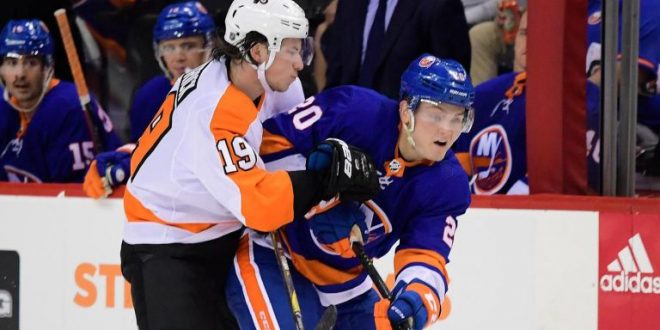 With the NHL pre-season coming to a close, it’s time to make assumptions and lose our minds over the NY Islanders personnel decisions. One such controversy, already, is the handling of Kieffer Bellows.

Closing ceremonies of the NHL pre-season is upon us, and I don’t know about everyone else – but it couldn’t have come soon enough.

Questions and opinions regarding personnel decisions are already in mid-season form from fans and talking-heads alike. Maybe it’s just the thirty-plus year fan in me that’s seen every incarnation of this franchise, but I refuse to lump myself into that game.

The Islanders haven’t played a single game of meaning yet this year – let’s take a deep breath.

I’d be the first to admit – I’m a little miffed to see a guy like Tanner Fritz still hanging on to a roster spot. Especially with the seeming emergence of legitimacy with his play with one youngster in particular – Kieffer Bellows.

Together with me, let’s seriously all take a deep breath… In through the nose, and out of the mouth…

Feel better? No? Too bad…

Let’s examine this a little closer. The vast majority of competition that Kieffer was up against were AHL prospects and bubble players looking to earn a slot with the big boys. The NHL vets that were playing are in the midst of finding their legs and getting back up to speed. I’d argue he wasn’t able to dominate in the games he played against that said competition. If he did, I’d be just as annoyed as the vast majority of fans I’ve run across.

It may seem like I’m trying to underplay what Bellows was able to accomplish in the pre-season – but we also need to be realistic. Yes, he played well – but do I think he played well enough to ultimately cost an established NHLer his spot in the lineup? That’s honestly debatable, and the reigning Stanley Cup winning coach, Barry Trotz – agrees with that.

When everything is said and done, the end-game plan with Kieffer Bellows, is to have him be one of the Isles top-6 forwards for

years to come. You need to ask yourself – Do you honestly think he’s at THAT level now and can play top-six for this Islanders lineup? What would be the point of having the kid floundering with third and fourth line talent with limited playing time? To get the occasional power-play shift?

The Isles top-six, assuming nothing changes, currently look as follows:

Throw-out any of your personal feelings toward any one of those players listed, and just look at the numbers and statistics. You cannot possibly argue that you could replace one of those players with Bellows today, and have a better lineup. They have the resume to prove it.

Kieffer will get his shot, I can promise you that.

Let’s take a quick look at the relationship that Barry Trotz had with Washington’s young-gun, Jakub Vrana. He wasn’t just thrown into the fray to flounder at the bottom-six of the Caps lineup.

No – at the age of 20 and 21, Vrana was able to get an ample amount top-six minutes in Hershey of the AHL. He was able to get up to speed on the Capitals game-planning and schemes – everything that Trotz insisted that he cleaned up regarding his game, all before he was able to even sniff a big-club roster spot.

It was noted that Vrana wasn’t too thrilled about having to do that – but what young prospect is?! Of course they want to play in the National League – that’s the goal.

Allow him to pack on some muscle. Let him learn Trotz’ system, and how to be a professional.

Lou Lamoriello echoes the same sentiment regarding young talent. When the Isles elected to send Dobson and Bellows back to the minors, he was quoted as saying:

“I thought they played extremely well…I think they have a bright future. Bellows certainly showed up well, better than I thought he would. But, right now, we have to make some decisions with the people we have here and we have to give the ice time to them. It’s best for him to go to the minors, play a lot, play in key situations and grow as a player.”

There’s nothing saying that Bellows isn’t going to get a look this year. I’d agree that his pre-season form proved that he had the desire to make the big-club, and kudos to him for making the decision a tough one. That’s all the coaching staff asks to their young players – “Play well enough to make me second guess my roster decisions”.

That’s a good problem to have when you’re a coach or General Manager.

Let him get to Bridgeport with a chip on his shoulder. Let him hang out with the veterans. Let him establish that camaraderie with his teammates on those multi-hour long bus rides. Let him study with his line-mates the systems and schemes put in place until they’re implanted firmly in the back of his mind.

And then – when Barry Trotz and Lou Lamoriello feel he’s at the point where he he needs to be with his growth. When he’s proven that he can hang long-term with the boys of the AHL, and he’s able to absorb and convey all that is asked of him from the coaching staff and personnel –

Let the man loose, and watch him fly.

Danny C Brasqo || A 30-plus year hockey fan who insists on acting like he knows what he's talking about. || Follow my ramblings and/or trash me on Twitter -> @brasqo || Or don't...
@brasqo
Previous Ryan Pulock: Key To A Successful Season For the Islanders
Next PTIsles: Episode 52 – Season Preview w/ Isles Play-By-Play Voice Chris King