Q & A with Artist Sean Connors

IslesBlog recently spoke with Sean Connors, an Islanders fan and artist that was profiled in a recent MSG fan commercial. We talked about his art, his inspiration and his Islanders fandom.

At what age did you realize you had more artistic talent than the average kid?

Probably around the the age of 5-6, I started to draw and would copy pictures or draw objects.

Do you recall the first sports illustration you completed?

I don’t recall a specific first. As a child I remember drawing a BMX trophy that one of my friends won. (1978)

Fans watching the game on MSG vs Columbus saw your fan commercial for the first time. How did that come together?

Actually through social media, I saw that MSG Networks was doing a “Fan Art Friday” on Instagram so I posted a few photos to see if it generate any interest. Late January they asked if they could use my Eli Manning Illustration. Sometime in September they reached out again and inquired if I would do a short “fandom” video showing my passion for the NY Islanders with my artwork. Of course I said yes, and Mid November they came to my house and we worked on the piece that aired December 1.

How long do you go back as an Islanders fan? Do you have a favorite moment that you’ve wanted to capture with your artwork?

I’d say it goes back to 1980, I was 10 years old and the USA Hockey team just won the gold medal in Lake Placid. I grew up in a town just south of there (Ticonderoga NY), so it was pretty exciting. After that I was hooked on hockey, plus the Islanders were having a good season and at 10 years old winning teams were the attraction, so I started listening to them on AM radio WGBB, (when I could get reception). But I remember the call, Tonelli to Nystrom! First cup win and I was on board. I have drawn Bob Nystrom a couple of times hoisting the cup as well as Denis Potvin, so I would say those were my favorite moments captured. 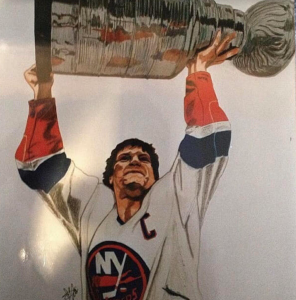 Have you ever been approached by the Islanders or other professional teams to do illustration work for them?

Back in the 1990’s I was asked through the NY Islanders media relations if I would be able to illustrate some players for charity. I did a series of Illustrations which were then auctioned off for the Easter Seals. Afterwards I did do a few other small projects for similar events. 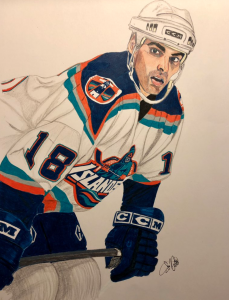 Have you drawn any photos for athletes by request once they saw your work?

Sure, in the 90’s players like Eric Fichaud, Travis Green, Rich Pilon, Derek King and Mark Parrish. Mark has shown off his piece on Twitter both hanging up and as his profile pic. (Thanks @MarkDParrish) Mark has a piece I called the 7 Line. Shawn Bates, Michael Peca and Himself. That was the first time I did a three player portrait. 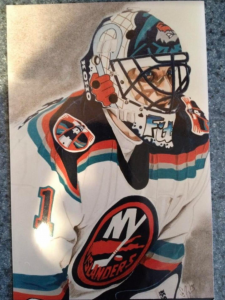 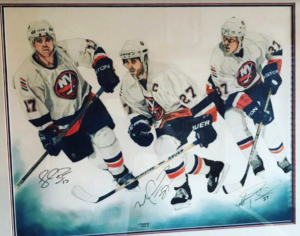 Claude Lapointe had a strange request, he wanted a Lifelike size illustration. I drew him from the Knees up which ended up being about five feet in size. Most currently @mattymarts17 also has one of my illustrations. He is a true gentleman to the fans and the sport, once again through social media I reached out to him and asked if he would sign an illustration I made for a friend as a Father’s day gift. We met up and he took the time to autograph it for me, we started talking and he inquired if I could draw something for him, we came up with The Stadium Series Illustration with Yankee Stadium in the background.

Take us through the process. What materials do you use to make your creations?

It starts with Bristol paper, with a smooth vellum side. Paper is made well and holds up well to the elements. Basic pencils, then Prismacolor Colored pencils. I like them because they blend well and finish with a nice texture. I also incorporate Prismacolor pastels to fill in the background, usually in the colors of the team.

How do you select the player or image you are going to use for inspiration?

I usually look at photos, so many great photographers out there taking action shots of players. The early days I would use trading cards. Today you can find so many great shots, but when I find one I will crop it differently and try and change something so it’s not exactly like the photo. Don’t really want to get into trouble using someone else’s “art”. Selection really comes from what I have envisioned in my head. I usually have an idea, then I try and find a reference I can use. 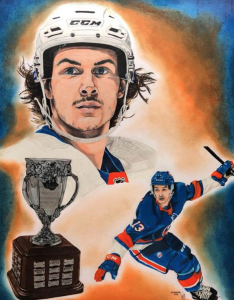 How long approximately does each project take from start to finish?

It depends on the size and composition. Most of the drawings I do are 14×17, larger are 19×24. Time frame varies due to my schedule, work, son’s travel hockey, and my daughters swim/band schedule. On average I tell someone please allow 3-4 weeks for completion.

Do you have a personal favorite?

I would have to say the Matt Martin Stadium Series piece. I really enjoyed the composition and the detail. 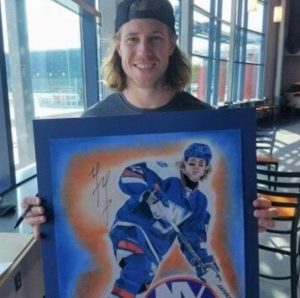 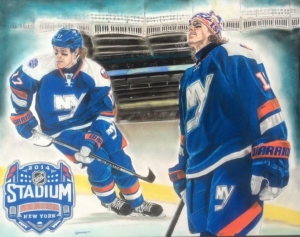 If readers would like a piece of art of their own, how should they contact you? Do you do personal pieces?

Through social media, DM me on Instagram @seans1470, DM me on Twitter @bck106. I usually respond fairly quickly. I don’t just draw Sports art, I have drawn animals, kids and Wedding portraits, so yeah I do personal pieces as well.

I would like to add that my artwork is a piece of me, it’s one of a kind and unique. I don’t do prints so please understand where my prices come from. You will always get quality work.

Previous Player of The Week Spotlight: Anders Lee
Next Taub: Where The Isles Stand After 30 Games

Player of The Week Spotlight: Anders Lee
Taub: Where The Isles Stand After 30 Games