We are now 23 games into the 2017-2018 season and any Islanders fan could tell you that this is the best hockey this team has played in while. 14-7-2, 3rd in the Metropolitan division, a +10 goal differential, and one of the hottest offenses in the league scoring 4+ goals in 5 of the last 7 games. This team is on pace for a very spectacular year and these five guys are, in my opinion, the biggest reason for this incredible start.

This might be one of the only surprises on this list due to a few shaky games in net for the 31-year-old starter. Greiss currently has an 8-2-2 record and a .903 save percentage. Despite a couple questionable games, he has been getting us points in the standings. There have been several games this year that we had almost no business winning but some acrobatic heroics from #1 either forced overtime or held the lead to save us a point or two. He has seen an average of 33 shots a game and still has 8 wins in 12 games. With a weak defense in front of him, Thomas Greiss has really done well between the pipes not only just this season but during his career with the Islanders so far.

Isles fans beloved Josh Bailey now has 5G, 23A, for 28P in 23 games. I think Islanders fans would believe you more if you told them that 44-year-old Jason Blake would come back and would be 2nd in the league in assists and 9th in the league in points 23 games in rather Josh Bailey doing it. I’ve known that Josh had the capability to be a top scorer but he always just went through the motions in the past and never played to his full potential. Now we have more talent than ever on this team and Josh has been able t0 get open more and create more time and space for himself and linemates. If Josh Bailey wants a pay raise, he’ll really deserve it if he continues playing this way. 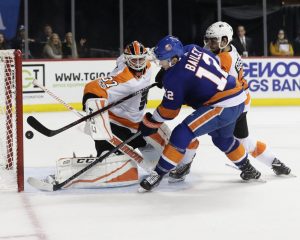 The Isles defense has been subpar this year and at times has left Jaro and Greiss out to dry against some high caliber offenses. Only a handful of defenseman have been consistently good in our own zone, and only one defenseman has been consistently good in our own zone AND on offense, and that player is Nick Leddy. Leddy has produced 6G, 14A for 20P in 23 games and is tied for 2nd in the league for points by a defenseman. This team needs production from the defense and Leddy has stepped up to the plate.

At only 20-years-old, this kid has exceeded all expectations. 6G, 17A for 23P in 23 games, Barzal is the shining light on this Islanders team and has made a HUGE difference in our point production. Now that Barzal is on the ice, teams have to take their eyes off players like Bailey, Lee, Ladd, Eberle, etc. This allows our skilled depth players to stand out and have much more time and space to make decisions. Watching Barzal play reminds me so much of Nicklas Backstrom, his potential is endless.

Do I really need to explain this? 15G, 11A for 26P in 23 games, John Tavares couldn’t be playing with more passion than he is now and needs to be signed ASAP. He has led this team by example and has set a winning atmosphere in the locker room. He is making players around him better and is looking like one of the best players in the league. We all know this isn’t new though because he’s been doing the same thing his whole career except this time he actually has a supporting cast.

Previous The Week Ahead: Canadian Calling
Next PTIsles: Episode 29 – This Team Is Fun

The Week Ahead: Canadian Calling
PTIsles: Episode 29 – This Team Is Fun