Home / Takes / Columnists / For Better or Worse, Real Islanders Showed Up to Game 2 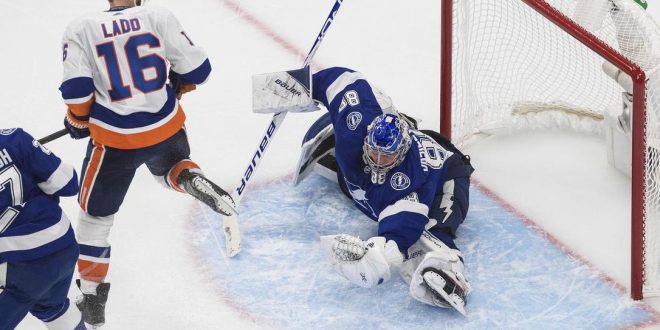 Daniel Friedman September 10, 2020 Columnists, Home, Takes Comments Off on For Better or Worse, Real Islanders Showed Up to Game 2 667 Views

The first game of the Eastern Conference Finals was a forgettable one for the New York Islanders and the prevailing sentiment was that the team would be ready for Game 2.

What we saw last night was Islanders hockey; the good and the bad associated with it. The team was more dynamic and the game was competitive. Within the first five minutes, it was very clear this was not going to be another 8-2 walk in the park for Tampa Bay.

The Isles’ defense held the Lightning, who are averaging 35.4 shots a game in these playoffs, to just 21, and recorded 28 of their own. They disrupted passing lanes, and were aggressive on the forecheck and along the boards.

Despite giving up a goal he probably should’ve stopped, Semyon Varlamov played a good game, making some key saves. At the end of the day, it’s hard to really blame your goalie for a 2-1 loss, especially when you don’t give him enough run support. The Islanders had several opportunities — including a five-minute major power play (which, for those of you who might be unaware, does not end after you score a goal) and a 5-on-3 in the third period — to put the game away and failed to do so.

Ultimately, they didn’t capitalize on Tampa’s mistakes, made two of their own and gave up two goals. In that sense, it was similar to Game 6 against Philadelphia, a game in which the Isles outplayed the Flyers but were less opportunistic than them.

Still, virtually all of the elements we wish we would’ve seen in Game 1 were present last night. That is somewhat encouraging, considering the gap between these two teams appeared to me much larger than it actually is after that first game.

I really liked Mat Barzal’s game, even though he didn’t have any points. He was dynamic and he was everywhere at the same time. That’s what he needs to be for this team. It was a welcome pivot from the Barzal that we saw smacking the glass in frustration three days ago.

There are two players, however, who do not merit the same praise. In fact, they deserve some heavy criticism.

Devon Toews has not been particularly good the last several games, and last night may have been his worst. He was making poor decisions with and without the puck, misreading plays and was a liability on the ice. I think it’s time we saw Johnny Boychuk back in the lineup. I think the Islanders miss him and his demeanor, and though the defense has been a nice story, it needs to end with him back in the fold. For me, Toews is the guy you swap out. A few games ago, I might’ve suggested Scott Mayfield, but I think his play has improved.

On the offensive side of things, I thought Jordan Eberle had his worst game of the playoffs last night. He was turning over pucks, flubbing passes and being fancy when he should’ve tried to simplify things. I don’t think it’s going to be a recurring issue, but the Islanders need him to continue to be the productive player he’d been going into last night’s matchup.

Of course, we need to talk about the power play. I actually thought it wasn’t quite as bad as the results suggest, because the Isles did have some quality chances with the man advantage and were thwarted by Lightning goaltender Andrei Vasilevskiy on numerous occasions. However, they have made a habit out of failing to capitalize on those kinds of opportunities in key situations and it’s clear to me they’re missing an ingredient.

The Islanders lack that pure sharpshooter that can add more dynamism to the power play. Right now, opposing teams know that, essentially, their plan is to get the puck to Ryan Pulock up top so he can fire a cannon. It’s an eventuality that is not hard to predict or prepare for. If you have another guy — say, Mike Hoffman — on the ice at the same time, that presents a dual-threat and forces the penalty killers to make tougher decisions. You need to give the playmakers on that PP unit more options and, right now, they have very few. It’s not like the Isles are abysmal on the power play, but they’re not good, either.

As I said last week, I still believe that what we’re seeing on the ice isn’t the finished product. I’m not sure how this series will end, but I know that my expectations going into it were certainly tempered. I believe the Isles are right on the cusp, but they’re missing a few pieces. We saw what they really have last night.

For better or worse.

Previous Taub: Maybe last night was exactly what the Islanders needed
Next Taub: The power play dooms the Islanders again at the worst possible time

Taub: Maybe last night was exactly what the Islanders needed
Taub: The power play dooms the Islanders again at the worst possible time