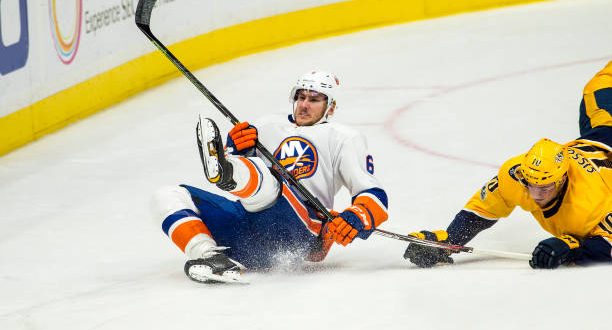 Ryan Pulock Was a Healthy Scratch Again, and That’s Okay

The Islanders engaged in a hard-fought skirmish with the Buffalo Sabres last night, an overtime win courtesy of Josh Bailey’s sublime assisting skills and a gorgeous goal by Mat Barzal.

That his view of the game was from above ice level has seemingly usurped anything that occurred on the playing surface.

And not only was Pulock scratched; the Isles scuttled him for Dennis Seidenberg! I mean, what is Doug Weight thinking? Right?

Well, in all likelihood, that decision was a calculated one. The reality is this is a non-issue. Defensemen often take longer to marinate than forwards — even when they’re good enough to be in the NHL and have little use for AHL exposure beyond the occasional conditioning/wakeup call stint.

Don’t believe me? Let’s take a look at some real-life examples.

Erik Karlsson is the best offensive-defenseman of his generation, but the start of his NHL career wasn’t silky smooth. After struggling through his first several games, Karlsson spent the next month in the minors.

He wound up playing 60 contests with Ottawa that season and finished with 26 points. From what I understand (very little), he supposedly turned out okay.

Shea Weber, who is likely the most obvious comparable for Pulock in terms of style of play and potential, suited up for a mere 28 games in his rookie season (2005-06).

Weber made his NHL debut on January 6th, 2006, and was scratched for 16 of the 44 matches Nashville played from that point through the end of the regular season. And, that was after he spent the first half of the circuit in the AHL.

It gets better. Weber appeared in just five games from the night of his debut through February 6th. He was a healthy scratch for nine-consecutive games over the course of that winter, and had other stretches where he was not an active participant as well.

Weber recorded 12 points in that rookie season. His career has since skyrocketed.

You don’t have to look very far to see another example of this, either. Nick Leddy’s NHL action in his rookie season (2010-11) was also limited. He played 46 games for the Blackhawks and 22 in the AHL (plus six games at the WJC). Obviously, that’s a little different, but the point is that despite his clear talents, he was not a shoo-in for the Hawks’ lineup on a regular basis

Pulock has played 23 of the Isles’ 37 matches this season. He’s currently on pace for 17 points, and should get better as the season wears on; the good ones usually do.

He’ll probably be in the 55-65 games-played range by the end of the regular season, which is pretty similar to Karlsson’s rookie workload.

Though at one point he was scratched for four-straight games between November 19th and December 1st, it’s worth noting the Isles won all four of those games.

This is not even remotely equivalent to the organization’s recent treatment of other young defensemen.

Under former head coach Jack Capuano, Matt Donovan played just 12 (yes, TWELVE) games in 2014-15. He spent the entire season with the big club, never being sent down to Bridgeport, which means he was a scratch 70 (yes, SEVENTY) times that season.

If Pulock’s situation was similar to those circumstances, you’d absolutely have a strong case. But it isn’t. It’s actually quite normal for rookie defensemen and, often times, it’s helpful to them.

You’re probably wondering how that could possibly be, and the answer is that sometimes you need to take a step back and get a different perspective on the game.

It’s a good learning experience and allows you to see every on-ice situation develop in its entirety. Being on the ice or watching from the bench doesn’t always give you that full vantage point.

Ryan Pulock is 23. He still has much to learn and will get there. Sure, he can step into a power play situation and launch a rocket, but as I’m sure you know, there’s so much more to hockey than that.

The way that Weight and the organization are handling Pulock is perfectly normal, provided they don’t exceed the recommended dosage. It might even help spark a second-half breakout for the young rearguard.

Either way, don’t fret over it too much. Buy the rumor, sell the news.

Pulock will be just fine — until the next time he’s scratched, of course.