Home / Home / Staying Or Going: Which Islander UFAs Should Be Resigned?

Staying Or Going: Which Islander UFAs Should Be Resigned?

Rob Taub April 20, 2018 Home, Takes Comments Off on Staying Or Going: Which Islander UFAs Should Be Resigned? 1,343 Views

Were just a few weeks into what has been a chaotic offseason for the New York Islanders. Questions have yet to be answered not only about whether the captain will stay, but also if there will be a new man sitting in the President’s chair or possibly a new boss behind the bench. But beyond those inquiries, there are a few players who face the uncertainty of whether or not they will be continuing to don the blue and orange. With an offseason full of mystery, this element only raises the stakes for this team even higher.

So who could be back or who’s on the chopping block? Our Rob Taub gives you his take. 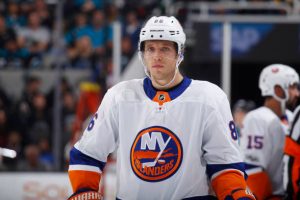 Through his four years with the Isles, Kulemin never got the credit he deserved. Yes, he and Mikhail Grabovski were brought in to be a 1-2 punch from there days in Toronto, but injuries and bad luck forced that to be sidetracked. Kulemin’s game never so-called suffer without Grabovski, and he remained a steady bottom-six presence and good penalty killer.

This season, the last of his four-year contract, wasn’t how Kulemin wanted it to go. He got hurt November 7th versus Edmonton and missed the rest of the season. The Isles penalty kill suffered in Kulemin’s absence, ending the season as the worst penalty kill in the league. Another factor that hurt Kulemin, is at 31 years old, missing from November until the end of the year most likely shot down any of his value to have teams calling for his services come July 1.

A one-year deal with Kulemin wouldn’t be the worst thing for the Isles. But after four seasons of very little offensive production, the need for the Islanders bottom-six to be revamped, and regrouping of the penalty kill, Kulemin’s time with the team should be up. The team is in need of getting younger at the bottom of the forward corps and another player who can provide production past the first two lines. 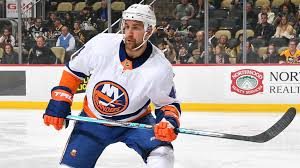 Look, you never want to lose a top-four defenseman if he’s been one of your best in recent seasons. But that’s life in the NHL. And that’s the reality that the Islanders and their fans must come to grips with with Calvin de Haan.

From the time he came up to the big club five years ago, de Haan has continued to work on his game each season, before having a breakout campaign in 2016-17. There were large expectations on the Carp, Ontario natives shoulders this past year. The problem was, just as he was really starting to get into a groove, he suffered a season-ending shoulder injury in mid-December. That injury was basically it for him as an Islander.

Here’s another case where the organization could give a healthy de Haan another one-year contract to prove that he is part of the long-term solution, and can be a stable force on the blueline. But as it’s been reported many of times, coming off his third shoulder surgery and the Isles banking on him not re-injuring it any worse, is a major risk. Add in the notion de Haan will be looking for a heavy-money deal, and it just seems like even more of a difficult task for the Islanders, who need to use that money to fill other holes or help pay their captain, John Tavares. 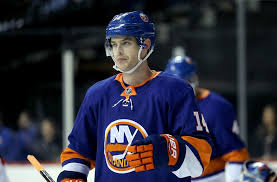 Ever since Thomas Hickey arrived on Long Island back in 2012-13, he has quietly been one of the anchors of an Isles blueline that has gone through several changes. Hickey’s small, but crafty nature, made him somewhat of a fan favorite. And one can not forget about his overtime heroics in both the regular season and postseason over the last six years.

Hickey, struggled before this season, as did many of his teammates. But even this past year — on the worst defensive corps in the game — Hickey had a career season, totaling five goals and 20 assists for 25 points. The Calgary native also found some excellent chemistry as a partner with young gun Ryan Pulock. Down the stretch of the season, those two were the Islanders best defensive pairing at both ends of the rink. Hickey’s +20 on a porous defensive team, also showed why he is such a vital presence on the backend.

I’ve always said the Islanders need to go and get bigger on the blueline. Hickey’s size is a detriment, but, how he uses it and his veteran mentality still makes me think he still does have a future with the team. The fact that he and Pulock excelled when put together, leaves me to believe that those two could be a possible pairing long-term, depending on if the defense does see changes. 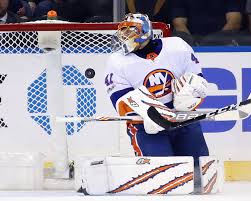 To say the relationship between the Islanders and Jaroslav Halak has been rocky, would be an understatement.  In his four seasons with the club, Halak has provided the extremely good, and extremely bad. When he was traded here before the 14-15 season, the expectations were the Isles had finally found their legit number one after Evgeni Nabakov retired. Presently, the team is back to square one.

Let’s face facts, the Islanders goaltending was insanely bad this past season. A lot of that can be blamed on the defensive woes of the team, but Halak did play a part. His history of letting up soft goals at opportune times stuck is rear head out again, and at times, Halak just looked overwhelmed. In a contract year, the 32-year old Slovak posted his least amount of wins in four seasons, and the lowest goals-against average and worst save percentage since his rookie season in 2006-07.

Are the Islanders really willing to bring back Halak on a one-year basis because of their unclear future in net? Could be. Complications could arise if that’s the case, based on the drama that he and the team have gone through. The time for the Isles to get younger in net and solidify the goalie postition for the future is crucial, and I don’t believe Jaro Halak will be a part of that plan. 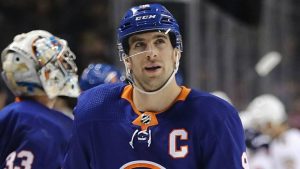 We saved the most important player for last. The Captain, John Tavares. It’s hard to believe that the drama of him possibly going to free agency has gotten to this point, yet here we stand. Tavares — whatever kind of adjective you want to describe him and what he’s meant to the Islanders since being drafted number one overall in 2009 — has been the most vital piece of the franchise in the last two decades, and his looming decision could alter the whole look of the team’s future.

The 2017-18 season was a banner one for Tavares. He once again showed flawless chemistry with linemates, Josh Bailey and Anders Lee. His numbers were the second best of his career (84), and he showed the most consistency in his game in over four years. Even though he was one point off the team lead, held by superstar rookie Mat Barzal, Tavares’s production and level of play reached another level. The Isles did miss the playoffs for the second season in a row, but offensively, it was the best he and the team looked in ages.

It feels like the speculation of him staying or leaving has been going on for a lifetime. This season, it seemed something was coming out every day that could change his decision to stand pat or look for greener pastures. No one has been more loyal, passionate, and driven to bring this franchise the success it deserves. Johnny stays and the rest of Canada and several other teams can keep screaming bloody murder.