In the next several weeks, our historian Brooks Simpson will take a look back at one of the greatest squads in both franchise and hockey history on the 40th anniversary of its championship run.

Today we almost take for granted the New York Islanders dynasty of the 1980s. That dynasty provides a great heritage and at times a daunting memory of what once was.

How many times have we seen Bob Nystrom’s overtime winner on May 24, 1980? What about the 15-game winning streak? What about beating the Oilers in 1983 and besting the Rangers a lot?

Yet it was during the 1980-81 season that the Islanders first faced the challenge of repeating as champions.

Yes, they faced several mighty teams (Boston, Buffalo, and Philadelphia) in the 1980 playoffs, but where was the revenge for the 1979 loss to the Rangers? Many teams can prevail in one memorable season (ask the 1994 Rangers), but 1980-81 would test for the first time whether the Islanders could achieve even more.

Want evidence that this team is overlooked? 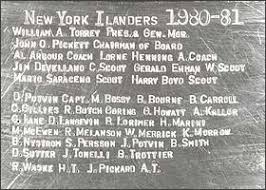 Most Islanders fans remember two things about the 1980-81 season: Mike Bossy’s quest to score fifty goals in fifty games and Butch Goring’s Conn Smythe-winning performance in the Stanley Cup playoffs, particularly in the Final against the Minnesota North Stars. They are less likely to remember that the season saw the first time that the Islanders would win both the regular season and playoff championships (there was no Presidents’ Trophy until 1985-86); that Bryan Trottier would tally a point in every postseason game; that Bossy would shatter Trottier’s single season playoff scoring record set in 1979-80; or that Denis Potvin would break Bobby Orr’s single playoff year point total with 25 points.

In short, this is an Islanders team to remember.

The 1980-81 season commenced with the offseason draft. The Isles’ days of early draft picks — except those secured through trades — were over. Scouting would have to find the right players, as it had when the team drafted Bossy 15th overall in 1977 (shades of Mathew Barzal). Such was the case when the draft opened in Montreal on June 11. The Islanders, slotted as the #17 team (they had only the fifth-most points in the 1979-80 season), chose Brent Sutter, followed by second rounder Kelly Hrudey, third rounder Dave Simpson, and both Monty Trottier and Greg Gilbert in round four. Later picks included future Islanders Ken Leiter, Mark Hamway, and Glenn Johannesen, although only Leiter made an impact over multiple seasons.

Of the earlier selections, long-time Islanders fans are familiar with Sutter, Hrudey, and Gilbert. Simpson, who had ripped up the record book in the Ontario Hockey League, experienced success in the Isles’ minor league system before leaving hockey altogether (although you may have heard of his brother Craig and his sister Christine), while Monty Trottier, Bryan’s younger brother, never played in a regular season game with the Isles, although his presence meant that for a year Bryan’s nameplate read “B. Trottier.” Of that year’s draft class, only Brent Sutter saw any action with the 1980-81 team although two goals and four points in three games marked a promising sign of things to come. 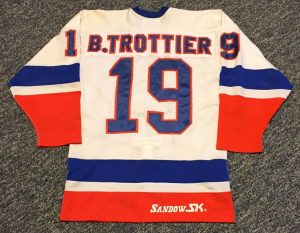 A look at the draft, however, suggests that the Islanders did well. The biggest miss? The pick after the Isles drafted Monty Trottier, the Oilers drafted Jari Kurri.

On the eve of the season, while the Isles would return basically the same cast that jumped on the ice on May 24, 1980, there would be some changes as the season got under way. Lorne Henning was now an assistant coach, although he played a handful of games (the last player-coach to see his name on the Cup). Jean Potvin’s role continued to diminish, while Steve Tambellini was now ready to be a full-time center. Anders Kallur, who had missed the postseason in 1980 due to injury, took the ice again. Although the Isles would have Goring for the whole year, they no longer had Alex McKendry, who had been shipped to the Flames.

League-wide, two teams that had been among the leading squads in the late 1970s, Boston and Buffalo, began to slide, while Montreal remained a threat, as did Philadelphia. The Los Angeles Kings were poised to make a splash, as were the St. Louis Blues: it would be the Canadiens and Blues who would prove to be the biggest rivals in the regular season standings. While much was expected of second-year NHLer Wayne Gretzky, the Edmonton Oilers were still largely a one-man team. Finally, although the Atlanta Flames had relocated to Calgary during the offseason, they remained in the Patrick Division.

In 1978-79, the Isles had a sensational regular season followed by a bitter playoff loss to the Rangers. in 1979-80, they slipped during the regular season, only to embark on a remarkable run to the Stanley Cup.

Brooks Simpson writes, teaches, and speaks on American history and politics as a professor at Arizona State University. A native Long Islander, he has been an Islanders fan since the franchise's inception in 1972.
@@BrooksDSimpson
Previous Taub: Martin’s excellent season rewarding the Islanders’ faith in him
Next Mandell: Islanders need to show Barzal more support