The Game Day Poster Shot Heard Around The World!

There are two great benefits of the Islanders visiting the Columbus Blue Jackets. 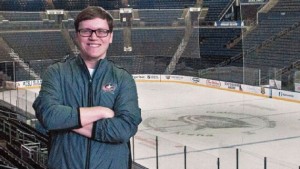 Paul Lukas of Uni Watch wrote a profile on Zych featuring his work earlier this season.  As he told Lukas, the posters aren’t a new idea, but one the team didn’t decide to act on until this season.

“The idea actually originated three or four seasons ago. It just wasn’t something we really acted upon. This year we wanted to find a different way to promote the games, and this was just another way to do that. We don’t have a lot of time to think here — the sports industry is very fast-paced — so if you get an idea, you have to run with it. So we kind of hit the ground running this season and it caught on.”

Below are the Zych’s work for all three Islanders games. Unfortunately, the team is not selling any of the posters. Instead, only doing a couple giveaways this year.

An ode to the Islanders Gorton Fisherman and their failed attempt to identify more with Long Islanders. Aboard “The Islander” the crew arrives safely (we believe) in downtown Columbus. 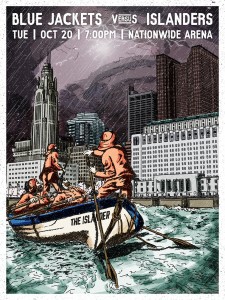 The city of Columbus doesn’t have the LIRR, but it did for the Islanders visit in December. One can only hope that the train arrived without delay for the 7:00pm faceoff. 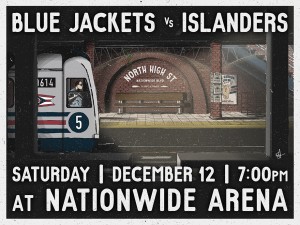 The latest work of art released last night. Where to start? 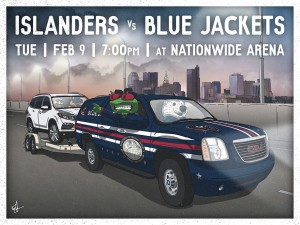 That is th Maple Leafs mascot “Carlton The Bear” driving the “Mascot Protection Program” truck built by “CBJ.” Carlton and Blue Jackets mascot “Stinger” are towing the YeSUV (@IslesWhiteSUV) with “Sparky The Dragon” and “Nyles” the ill conceived team mascot from the Mid 90’s. 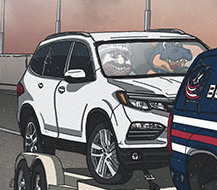