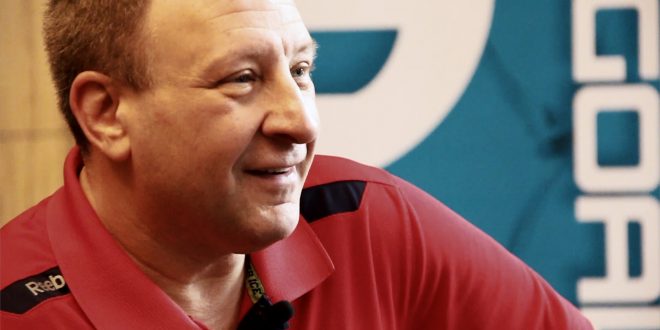 Mitch Korn… By all means, the only goaltending coach I’ve ever cared about in my 30-plus years of hockey fandom.

The Bronx, New York native is described as a savant when it comes to the art of goaltending. His brilliance in teaching at the NHL level started in Buffalo in 1991, where he had the opportunity to work with some young up-and-coming Czech goalie by the name of Dominik Hasek. John Muckler (Sabres coach at the time) would describe Hasek as “a little unique” when he had an initial discussion with Korn about him.

When Dominik Hasek morphed into The Dominator – to finally become The Hall Of Famer, he was sure to list Mitch for helping him in his journey. “I was lucky to have a coach who never really tried to change my style”, Hasek said to reporters at his induction ceremony. He would go further to thank Mitch Korn in his Hall Of Fame speech, cementing the same sentiment.

That’s the type of coach Mitch Korn is. He’s not going to approach a player and attempt to reinvent the wheel by bombarding them with techniques that may not necessarily work with that player’s body type. He’s precise in tweaking a players strengths to work for them. If you made it into the organization, the talent is obviously there. Now it’s just about making the small adjustments, and building upon what the athlete already possesses to make you a success at the NHL level.

“In my last year in Nashville in 2013-2014, we signed a goalie named Carter Hutton. He had a particular technique issue that we felt needed to be fixed.”, Mitch said in an interview with TNG  “It came to me, that the use of a medicine ball in a variety of ways could fix the issue. It worked. In a quick three years, the medicine ball has become mainstream. Goalie coaches across the world are using it, or something like it. THAT is really cool… to be able to come up with something or do something that permeates an entire industry.”

In an interview with Greg Wyshynski, Mitch revealed some of his thought process on how he evaluates the game-“I break the game down into three parts: The physical skills. Flexibility, size, which you can’t control; it’s mental skills. Finding pucks in traffic, connecting dots, reading patterns. Hockey is a game of patterns – the faster you identify the patterns, the better you’ll play,” he said… He would further tell Greg that he keeps his own stats – “If Steven Stamkos shoots the puck from there, and Tie Domi shoots from the same spot, doesn’t that make a difference?” he asked. “Did the goal come from a pass? Was there a guy at the back door we had to worry about? How many seconds did the shooter have?”

Speaking with BleacherReport, Braden Holtby noted – “He’s not looking for the late solution to the problem. He’s looking for the problem before it occurs. You don’t see many people in coaching, and especially in goaltending, be like that. He just really gets into seeing people become their best self. You can see that at his camps and here in the NHL.”

His student’s improvements and successes are his resume – and wow, are they impressive. The list of notable NHL talent whose stock he’s elevated reads like a fantasy hit-list for any hockey aficionado…

Just to name a few that he’s worked with:

The convincing of Mitch Korn to join the Islander’s organization, may prove to be a chore for both Lamoriello and Trotz. With Mitch on the wrong side of 60, he’s been dealing out hints that he’s trying to wind it down. In July of 2017, Capitals GM Brian MacLellan noted in a conference call announcing Korn’s role-swap to “director of goaltending”… “[Korn’s] going to be director of goaltending…He wants to cut back on his schedule.”

It’s not a secret that Mitch loves running his hockey camps and giving back to the community that has helped make him a success. However, there are random glimmers of hope as noted from an interview with Mitch’s ex-associate, Ben Vanderklok. Regarding Korn finally looking to wind it down for good, concentrating on his camps and living the good life -“He says that every year… Like he’s said, he has no hobbies, so I don’t know what he’ll do. I asked him once after he said that, I said, ‘What are you going to do, play cribbage?’”

If the possibility of the Isles bringing Korn in are indeed true, they need to do it in whatever capacity he’s willing to come. His ability to bring positive results to all of his students are a rare gift to be had. I don’t think I’d receive any push-back by saying the Islanders goaltenders could use a fresh voice…Robin Lehner is a 27 year old talent, who has all the tools to build a decent house, but doesn’t have access to the blueprint. I’m pretty confident Mitch Korn can provide that blueprint. His building record speaks for itself. He has experience and success in working with talent from other countries that have a language barrier (Soderstrom & Sorokin?), most recently with highly touted Washington Capitals prospects – Vitek Vanecek and Ilya Samsonov. The man knows what he’s doing, and he’s very good at it. Give a talent a couple of years under his tutelage, and watch the growth and improvement. It’s almost a guarantee.

How-a-bout it Mitch? One last go of it with Barry?

Danny C Brasqo || A 30-plus year hockey fan who insists on acting like he knows what he's talking about. || Follow my ramblings and/or trash me on Twitter -> @brasqo || Or don't...
@brasqo
Previous Making The Case For Who Should Be The Next Captain of The Franchise
Next It’s Now or Never for Brock Nelson