We made it!  At long last, a fresh season of New York Islanders hockey is upon us.  As with every opening night, hope springs eternal for this young and promising team, one which is coming off its best regular season in over 20 years.  The Isles welcome the Chicago Blackhawks to christen the Barclays Center for its first ever regular season NHL game.  Last years bitter first round defeat to the Washington Capitals in 7 games, as well as the old barn in Nassau, are history.  Brooklyn, black jerseys, and blocked views were the talk of the summer amongst fans, as the team didn’t do much in terms of off-season personnel moves.  Michael Grabner, Colin McDonald, Tyler Kennedy and Michal Neuvirth are gone from last years squad, while newcomers Thomas Greiss, Steve Bernier and Marek Zidlicky are donning the orange and blue (and black) for the first time. 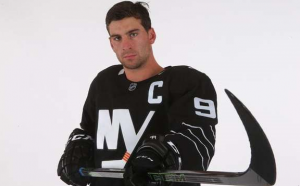 The biggest question around the Islanders during training camp has been the health of goaltender Jaroslav Halak.  As always, the Isles have been clandestine-to say the least-about Halak’s injury, but when speaking to Newsday today Halak said he hopes to “be back soon” which is not a good sign for Friday night’s game.  Another interesting personnel issue to watch is what happens with rookie defenseman Ryan Pulock. Of course nothing is official until head coach Jack Capuano puts his guys on the ice, but from all accounts it appears that Zidlicky and Brian Strait have been tabbed as the 3rd defense pair.  Both are experienced blue liners, but Pulock is the Isles most talented defense prospect with strong offensive skills, particularly on the power play.  As of now though, it seems he’s destined for the press box on opening night.

The Blackhawks raised their Stanley Cup Champion banner Wednesday night, then went out and gave up 3 goals to the New York Rangers in the first period.  Corey Crawford made some spectacular saves as Chicago’s defense gave up many odd-man rushes to the blue shirts, but it’s logical to think that backup goalie Scott Darling will get the start on Friday.  The Blackhawks are relying on a lot of young talent as well, thanks in part to many big names leaving during free agency and via trade (a seemingly annual problem for the cup winning team).  Offensive studs Patrick Sharp and Brandon Saad are no longer in Chicago, instead replaced with the likes of young Teuvo Teravainen and Artemi Panarin.  Panarin scored the first goal for the Blackhawks last night. 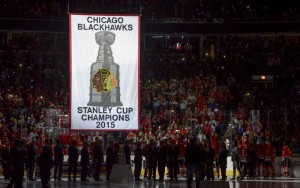 The teams split the season series last year, with the Isles winning 3-2 at home in December, and losing 4-1 at the United Center in March. Look for the Islanders to put their top defense pair of Johnny Boychuk and Nick Leddy out against the line of Jonathan Toews, Marian Hossa and Teravainen, and also keep an eye on the return of defenseman Travis Hamonic who was hurt in last years first round loss to Washington.  It’ll be interesting to see how many minutes the Zidlicky/Strait pairing get, as well as how the Isles penalty-kill looks against the powerful Blackhawks power play.  If Halak can’t go, figure that Thomas Greiss would get the nod, with newly signed J.F. Berube backing him up. 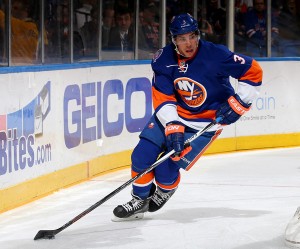 Puck drop is at 7:30 on MSG+ with pre-game festivities likely to be aired prior.  Incumbent Isles play-by-play voice Howie Rose will be replaced by original broadcaster Jiggs McDonald along with Butch Goring, as Howie will be in L.A. calling the Mets-Dodgers game.  Chris King and Greg Picker have the call on the newly formed Isles Radio Network (WRCN 103.9, WRHU 88.7, and WNYE 91.5).   For those fans that are out of town, NHL Network is carrying the game as well.