The New York Islanders look to keep their three game winning streak alive as they skate into Columbus to take on the Blue Jackets tonight at Nationwide Arena.  Columbus has had a disastrous start  to their season, beginning the year 0-6-0 after many NHL insiders considered them a favorite to win the Metropolitan Division.  In their history, the Blue Jackets are 14-4-4 against the Islanders.  The Isles are coming off their 3rd straight win, all at home, after beating the Winnipeg Jets, Nashville Predators, and San Jose Sharks this past week.  This is a favorable matchup for the Isles, as they have scored 14 goals in their last 3 games, while Columbus has allowed 17 goals in their last 3 and have averaged 5 goals against per game since opening night

The Blue Jackets made one of the biggest splashes of the off-season by trading for Chicago Blackhawks playoff hero Brandon Saad.  The 22 year old left winger has had a decent start to the season scoring 3 goals and adding an assist, but is a dismal -6 so far on the year.  Columbus’ blue line as a whole has been their achilles heel so far, so look for the Isles to pressure them early and often.  It would be a welcome sight to Isles fans to see the team start strong, as they did against Winnipeg, and be able to sustain a 60 minute attack against the Columbus defense.  The Isles last two wins against Nashville and San Jose have both been come from behind victories. 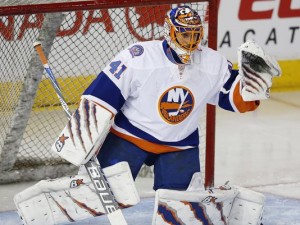 The Isles are led by John Tavares who is 3-5-8 in 5 games so far this season, but lately have gotten secondary scoring from Anders Lee, Kyle Okposo, and Brock Nelson.  The Islanders are also finally healthy for the first time all year, now that starting goaltender Jaroslav Halak is back, along with defenseman Thomas Hickey.  Although not confirmed, expect Halak to start in net tonight.