Home / Home / Tuchman: Islander Defensemen Getting Offensive this year has been welcoming

Tuchman: Islander Defensemen Getting Offensive this year has been welcoming

David Tuckman April 16, 2021 Home, Takes, The Team Comments Off on Tuchman: Islander Defensemen Getting Offensive this year has been welcoming 658 Views

One thing that almost every Stanley Cup winning team has in common is a defenseman that can move the puck and contribute offensively. Islander fans know this all too well. Denis Potvin was one of the best and is still, even today, the franchise’s 3rd all-time scorer.

This trend hasn’t stopped and I’d argue it’s even more important than ever. It’s hard to score goals in the NHL and it’s even more difficult in the playoffs. Over the last few seasons each of the Cup-winning teams had an offensive defenseman. John Carlson of the Washington Capitals, Alex Pietrangelo of the St. Louis Blues and of course Islander fans witnessed the greatness of Victor Hedman first hand last year.

And this brings me to the Islanders.

Anyone who has watched the Isles play this season has noticed their defensemen getting involved offensively more than ever. Adam Pelech was always our shut down defensive defenseman (I often referred to him as this team’s Ken Morrow). But, the 26-year-old has been jumping up in the play and frankly he looks good doing it.

My first thought was, contract year. Pelech is trying to make himself more valuable – smart. But, I noticed Ryan Pulock and Nick Leddy carrying the puck into the offensive zone more this year too. I thought back to the bubble last summer and the club’s series vs Tampa Bay. The Lightning had loads of talent on offense and a Vezina winner in goal — Andrei Vasilevskiy. But when I watched them play the Islanders, what set them apart, what made them so difficult to play against was how mobile their defensemen were. It seemed like they could all skate and none of them were shy about jumping up into the play. When it comes to playing defense against the top offensive lines in the NHL, Barry Trotz and the Isles have had all the answers, but when a fourth player jumped into the play and it was a player of Hedman’s caliber, or Mikhail Sergachev or even Ryan McDonagh, the Islanders found themselves outmanned.

When you watch good teams play, you see a unit play defense together and a unit play offense together. It’s one of the reasons losing Devon Toews hurt so much and why Colorado was happy to add what appeared to be a redundant “piece”. Avalanche GM, Joe Sakic realized you can never have too many great skaters who can move the puck on the backend. It’s why Isles g.m. Lou Lamoriello was very clear about the fact, he did not want to trade Toews.

Keep all this in mind as we look at this Islander squad. Barry Trotz knew he didn’t have the firepower up front he wanted or needed and mentioned that a few times after two straight years of postseason runs. The Isles already play great team defense. It was time for them to play great team offense. Trotz realized that for this team to score enough to win to get to where they wanted to go, his defensemen would have to get more involved offensively. Now, the Islanders don’t have a Denis Potvin or a Paul Coffey on this team, and as a group, the defensemen have collectively scored less than ten goals. Based on that, you might think they can’t contribute offensively. But take a look under the hood.

At the ripe age of 30, (Nick) Leddy is possibly putting together his best season ever. His 24 assists are 2nd to only Mathew Barzal. While it took Pulock 95 shots and 42 games to finally score a goal, he’s shown a willingness to carry the puck into the offensive zone we haven’t seen before. He’s always been counted on to shut down opposing teams’ big guns and unleash his cannon of a shot, but his playmaking ability has been on full display this season.

Take a look at the Islanders’ offense with Pulock on the ice and when he’s off per HockeyViz.com. 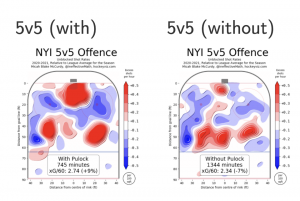 The same thing can be said for Pelech. 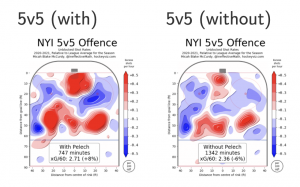 It can’t be overstated how important this is to the Islanders. In the NHL, it’s nearly impossible to reach the ultimate goal without your forwards contributing defensively and your defensemen contributing offensively.

I believe playing the Lightning in the Eastern Conference Finals was a learning experience for our defensemen (and maybe Trotz). While they may not get their names on the stat sheet as often as others, their contributions are just as important if the Islanders want to hoist the Stanley Cup a few months from now.

Previous Mandell: Prospect Adams joining Bridgeport at good time
Next Zella: Not Time to Panic with the Islanders

Mandell: Prospect Adams joining Bridgeport at good time
Zella: Not Time to Panic with the Islanders