Home / Home / Tuchman: It’s time for Barry Trotz to get a little uncomfortable

Tuchman: It’s time for Barry Trotz to get a little uncomfortable

David Tuckman April 29, 2021 Home, Takes, The Team Comments Off on Tuchman: It’s time for Barry Trotz to get a little uncomfortable 550 Views

Anthony Beauvillier snags the puck from the corner and kicks the biscuit to an open Mathew Barzal behind the net. The kid effortlessly spins away from a hapless defender, spying a wide-open Oliver Wahlstrom at the left face-off circle, but that window is quickly closed. Barzal moves like water through one defender and turns a second inside out. Wahlstrom is still in position for a lethal one-timer. Number 13 dangerously edges the blue line and just as he’s about to pass to Wahlstrom, Washington’s Nick Jensen does his best Aaron Judge impersonation smacking Barzy’s hands with his stick. No call. The puck squirts out of the offensive zone and …

Barry Trotz wakes up screaming, “NO!” The sweat drips off him.

The idea of Wahlstrom playing alongside Barzal is sure to give the Islanders’ bench boss nightmares, but It’s time for him to get a little uncomfortable. If there was a criticism of Trotz during his time in Washington, it was that he’s reluctant to play the kids. We’ve seen that play out on the Island, and for the most part, Trotz is almost always correct. We all remember where the Islanders were just three years ago and I think we should all #TrustinTrotz more often than not.

However, we’re at a crossroads now.

On March 12th, Anders Lee was injured and for whatever reason, this team has never been the same. Actually, let’s be more specific — Barzal’s line hasn’t been the same.

At first, Trotz put Leo Komarov on the line and we assumed that Leo was just a placeholder until g.m. Lou Lamoriello did his job and acquired a suitable replacement. Lamoriello made the trade. Trotz had two new toys at his disposal in Kyle Palmieri and Travis Zajac. We all expected Palmieri – a player with an excellent shot, a player who’s always been a fantastic finisher, a player who’s averaged almost 30 goals per season over the last five years – to be on Barzal’s line. It made too much sense. No need to disrupt the chemistry throughout the lineup and our most talented playmaker gets someone who can finish.

That didn’t happen. Now there’s only a handful of games left in the season and we’re left wondering if the Islanders will ever score 5v5 again?

But without Barzal playing like we all know he can, this team isn’t going very far. Great coaches make adjustments. They adapt to what they’ve got. We’ve seen Trotz do this masterfully over the last three seasons. It’s time for Trotz to think outside the box, or rather “his box.” If he can’t get this team going, it’ll be an early spring exit for the Isles.

If you’re reading this, you’re probably thinking I’m advocating for Palmieri to play on Barzal’s wing. I do think that would be fine. But in my opinion, there’s a better option.

His name is Oliver Wahlstrom. We all know that idea is something Trotz is not comfortable with. It terrifies him. A line of Beauviller-Barzal-Walhstrom could be a thing of beauty and I’ll tell you why it’ll work:

When we look at the somewhat diminutive Beauvillier, most people don’t think he’s a particularly good forechecker or good defensively, but they’d be incorrect. From a defensive standpoint, Beaviller more than holds his own. Per Hockey Viz: 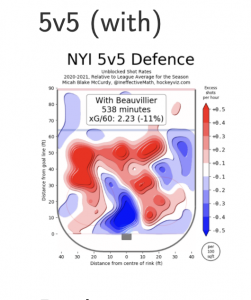 From a forechecking standpoint, Beauvillier is constantly battling bigger defensemen and coming away with the puck. Per Corey Sznajder (@shutdownline on Twitter), Beauvillier is 71st out of 343 qualified forwards in forecheck pressures and 4th on the Islanders in recovered dump-ins. His tenacity and speed are invaluable. Wahlstrom, when playing well, wins a lot of those one-on-one battles in the corners and on the boards. Two players who can forecheck and retrieve the puck for the Isles most dangerous playmaker is something they desperately need. Once they get the puck to Barzal, you know he’ll be able to find one of them for a shot.

I’m not going to riot if Trotz puts Palmieri on the Barzal’s wing, but I loved the chemistry that was developing between Brock Nelson and Palmieri. As far as I’m concerned, I’d like to see more of that.

Barry Trotz loves his veterans. He feels comfortable when they are on the ice, in big situations. But if he wants the Islanders to fulfill their potential and really contend for the Stanley Cup, he’ll need to get a little uncomfortable.

He needs to start trusting the kids in bigger moments.

Could it blow up in his face? Yes. Could it be a complete and utter defensive disaster? Absolutely. But think of the upside.

If it works, the Isles will once again have three lines that can score and maybe, just maybe, get back the confidence and momentum they had back in February and early March.

Previous Ryder: Despite Inept Stretch, Islanders Have the Tools to Finish Strong
Next Repetto: Islanders have had certain factors contribute to winning the season series against the Blueshirts

Ryder: Despite Inept Stretch, Islanders Have the Tools to Finish Strong
Repetto: Islanders have had certain factors contribute to winning the season series against the Blueshirts