Tuchman: Josh Bailey is the answer to the Islanders Expansion draft issues

David Tuckman April 8, 2021 Takes, The Team Comments Off on Tuchman: Josh Bailey is the answer to the Islanders Expansion draft issues 1,456 Views

The Seattle Kraken have been preparing for a while now and on July 21st, Ron Francis will take players from each team in the NHL (except the Vegas Golden Knights). 30 players from 30 teams. The rules are the same as they were in 2017 when Vegas selected their players. Francis has been taking phone calls from other general managers as everyone tries to gauge who the Kraken covet and you can be certain, the upcoming expansion draft is very much affecting this trade deadline.

When it comes to the New York Islanders, it’s an interesting rabbit hole as we climb in.

As for the rules:

Before this season, it was assumed the Islanders would protect three defensemen and seven forwards – That is what most teams prefer to do for obvious reasons, but with the emergence of Nick Leddy and the friendly contract of Scott Mayfield, does Lou Lamoriello dare protect four defensemen?

If Lou went that route, what would our protections look like?

Clearly this is not the path I’m advocating. With Brock Nelson, Anders Lee and Jordan Eberle still to protect, The Islanders MUST go the 7/3 route.

By opting to protect four defensemen, the Islanders risk losing an integral part of their offense and as we all know, the Isles don’t have the depth (or cap space) to replace these players.

If they go with three/seven, they’ll either lose the friendly contract of Mayfield and while I know many fans aren’t thrilled with his inconsistent play this season, his 1.45M contract just can’t be replaced with any desirable options.

Or they lose Leddy. With the loss of Devon Toews, Leddy has become even more valuable to this team and he’s seemingly playing better at the age of 30 than he has ever. Leddy haters have had to eat a whole bunch of humble pie this season.

What I’m proposing the Islanders do is protect seven and three and give up an asset so that the Kraken take the player we want them to take. Who is that player you ask?

The most polarizing player on the Islanders. A man who recently passed the 900 game mark and notched his 500th NHL point.

Josh Bailey (sing the song with me).

If you look up loyalty in the dictionary, you’re likely to see Bailey’s face and because of that, it pains me to even suggest this, but this is a business – and we are reminded of this fact year after year.

Bailey is an incredibly smart player and that intelligence allows him to perform at a high level despite his diminishing skills.

“I think when the game gets quicker and more important, what you find with Josh is his intelligence level,” Islanders coach Barry Trotz said about Bailey.  “With Bails, it’s all IQ.”

Even Bailey’s strongest supporters would be hard-pressed to say that Bailey is getting by on his physical gifts – the question is, how long can he get by with his brain?

On the power play, I’d suggest his IQ gets in the way sometimes. We’ve all seen him get the pass on the boards and hold it, hold it and yes, you guessed it, hold it. Power plays work when you move the move quickly forcing the penalty killers to move, expend energy and get out of position. If you watch effective PPs, it’s not a cerebral thing – it’s more instinctive.

I spoke to Josh over at Evolving Hockey to get his take on Bailey.

“Bailey was fairly good in his prime, consistently getting top-line EV minutes and 2nd-line PP minutes…. He’s always had a positive impact offensively only registering one sub-level replacement level season – this season. Defensively, he had one standout season – 2013-14, but other than that, he’s not particularly good.”

“He hasn’t been the same winger in his late 20s and now early 30s, posting only slightly above-replacement level seasons since 2016-17. Through last season, he was still getting minutes close to that of a top-line winger while adding little value in any component of the game.”

“Heading into the season, Evolving Hockey projected him to be the Islanders 9th best forward. Based on this season and his age, he’ll likely project even lower next season.” 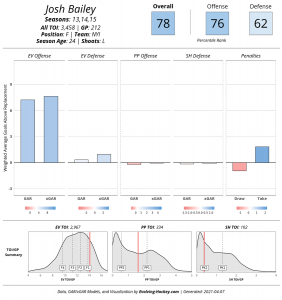 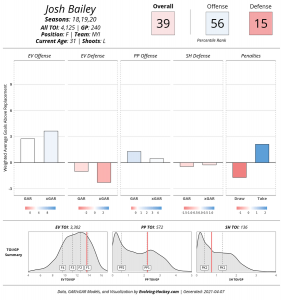 To further support this argument, I decided to get a 2nd opinion and went over to HockeyViz to see what they had on Bailey.

What we see here is more of the same. Once Bailey came into his own, he was fantastic. The 2012-13 season was his breakout and for the next three seasons, he was the player the Islanders hoped he’d be when they selected him 9th overall in the 2008 draft. Unfortunately, the past couple of seasons haven’t been as productive and my concern is that it isn’t going to get better.

Distractors will point to Josh Bailey’s performance in the bubble and how integral he was to the Islanders’ success and I won’t be able to disagree. He’s had many highlight moments in his Islander career and I’m certain, will go down in history as one of the most beloved Islanders when it’s all said and done. Unfortunately, the consistency is no longer there and while I’m thrilled he’s part of this Islander team as they push into the playoffs, I’m less optimistic about him for the next three seasons.

The Islanders have cap issues and an expansion draft to contend with. If Seattle is willing, jettisoning Bailey is the answer to both.