Tuchman: Palmieri vs Hall? The Islanders can’t go wrong with either choice

David Tuckman April 4, 2021 Home, Takes, The Team Comments Off on Tuchman: Palmieri vs Hall? The Islanders can’t go wrong with either choice 1,768 Views

As of April 4th, the Islanders sit tied for the top spot in the Eastern Division, and they are coming off two straight solid wins over the Capitals and Flyers. But, I think most Islander fans would be in agreement (and let’s be honest we agree on almost nothing), that this team is not likely to make noise in the playoffs unless g.m. Lou Lamoriello makes a move.

Barry Trotz and the players had us fans believing that this could just be our year. With captain Anders Lee scoring like it was 2017 and Oliver Wahlstrom’s emergence, this team was extremely difficult to play against. Wave after wave they came at you – disciplined, hard. Nobody wanted to play this Islander team. Three lines that could score, no real defensive deficiencies, and the tenacity of a bulldog.

And then, Thursday March 11th happened.

Lee tore his ACL, and at that moment, the Islanders lost their leading goal scorer, a terrific net presence and their captain.

Now, losing a player to injury isn’t an excuse. Well, it shouldn’t be. All teams lose players to injury and have to figure out a way to persevere. In a perfect world, that would be the case with this version of the Islanders. Unfortunately, this Isles team isn’t built that way. A couple of poor drafts, and a lackluster prospect pool have left the organization dangerously thin when it comes to depth – especially with regards to wingers who can score. Let’s not forget where this team was just three years ago. Lou Lamoriello and Trotz have been able to turn this group into winners, but Lou isn’t a magician. They still lack the depth and as a result, injuries will hit this team harder than most.

In addition, the Trotz system, “this team” works when all four lines are going at full speed. If you take a cog out, it doesn’t work. The Islanders have plenty of replaceable players, but I’d argue there’s an abundance of more indispensable players than any other team. Adam Pelech, Ryan Pulock, Mathew Barzal, Lee, Jordan Eberle, Anthony Beauvillier, J.G. Pageau, Wahlstrom, Nick Leddy (with how he’s playing this season) and Casey Cizikas are all essential to what the Islanders do. I can’t think of another team with that many “indispensable” pieces.

We all know Lou needs to do something.

What should he do?

If you need 100,000 soldiers to win a war, you don’t send 5,000. They’ll get killed and you’ll lose the war anyway. Trading for a middling piece that gives the appearance of trying, but is obviously not enough is pointless. The Islanders waste whatever assets they have (they don’t have many) to acquire someone who isn’t going to put them over the top. If you’re going to try and win, go all in!

Because of cap issues next season, this comes down to two players – Kyle Palmieri and Taylor Hall.

These are the only two players who play for teams that are out of it,  are on expiring deals, and are potentially good enough to put the Islanders back in the same position we all felt they were in on the morning of March 11th.

For the record, I don’t think Lamiorello can go wrong with either player.

Palmieri has always been more a sniper (Career shooting 12.6%) and hasn’t scored less than 24 goals since 2015-16. The 30-year-old was off to a slow start this season, but he’s got his shooting back up to 9.6% and he’s potted eight goals. Despite his goal-scoring prowess, the advanced stats suggest Palmieri might be a better defensive player than offensive.

There’s little reason to think Palmieri wouldn’t be a huge upgrade for the Islanders, and with his cap hit being at just 4.65m, that would leave them with enough room to acquire another piece or two? Maybe Calle Jarnkrok or Mattias Janmark.

Now, let’s look at the case for Taylor Hall.

If you spend time on Isles Twitter, you’ll think there’s some terrible story about how Hall was a bad teammate or was a me-first player at some point. For the life of me, I can’t find anything. Yes, he’s now on his fourth team in his career and that can be a red flag, but that alone shouldn’t make you think he won’t fit in with the Islanders’ tight locker room. I mean, he and Eberle are apparently great friends so there’s a familiarity there.

As for Hall, the player – he’s having an abysmal season. Well actually, abysmal might be too kind. He’s scored only two goals this season. TWO! The question is, has he regressed or is he still playing well?

According to the fine people over at Evolving Hockey, there’s little evidence to suggest he can no longer play the game. Is he the player he was when he won the MVP? Absolutely not. Is he still a really good hockey player who is playing a very high level? Yes.

First the bad. Hall has never been much of a sniper. His career shooting is only 10.1% 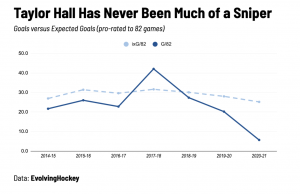 But, he’s currently shooting 2.3% which you have to imagine is an anomaly. Hall has 86 shots this season so in a “normal” year we could expect him to have 8-9 goals. Would Islander fans feel better about using an asset to acquire the 29-year-old forward if he had nine goals instead of two?

Hockey Viz, another analytics-based site, measures that Hall is just as good offensively, but his defense took a dip the last two seasons. I can’t speak on last season, but I suspect it can’t be easy to stay disciplined when your team is constantly losing.

And now the good. Hall is a gifted skater. He’s an excellent passer, sees the ice well and has the ability to enter the zone with the puck. His most underrated skill might be his ability to forecheck and puck retrieval. When I watched him play the last couple of weeks, I saw a highly skilled player who is trying to do too much on an awful team. As far as I’m concerned, he passed the “eye test”.

As for the advanced numbers…

From Evolving Hockey: “Based on Corey Sznajder’s tracked stats so far this season he has been the primary forechecking presence, battling for 5 dumped pucks per 60 minutes (2nd on the team) and pressuring defencemen on the forecheck over 7 times per 60 (1st). ….  He currently ranks first in the NHL in high danger passes per 60 minutes (5.3), seventh in zone entries leading to a scoring chance per 60 (7.4), and 18th in shot assists per 60 (10.7).”

This doesn’t sound like a player who’s already lost the battle to father time. At just 29, he’s still got a lot of hockey left.

At the end of the day, the lack of finishing is concerning if you’re the Isles. In that regard, he won’t replace Lee, (nobody can), but Hall’s doggedness in the corners and his ability to retrieve the puck does help replace that aspect of Lee’s game. While he won’t replace Lee’s ability to finish or his ability in the front of the net, he can replace Lee’s forechecking and give a boost to the PP, giving Barzal a break with regards to zone entries.

Neither player comes without risk, but these are the two players who have the upside to make a difference.

For my money, Hall is the player with the moonshot upside. I really think he could flourish playing with a good center where he’s not being asked to do too much.

Previous Greenberg: Rakell Might Be The Islanders’ Man on Deadline Day
Next Mandell: The new, normal experience at Nassau Coliseum for an Islanders fan

Greenberg: Rakell Might Be The Islanders’ Man on Deadline Day
Mandell: The new, normal experience at Nassau Coliseum for an Islanders fan