Home / Home / Tuchman: The Light has Turned on for Scott Mayfield

Tuchman: The Light has Turned on for Scott Mayfield

David Tuckman June 9, 2021 Home, Takes, The Team Comments Off on Tuchman: The Light has Turned on for Scott Mayfield 844 Views

The New York Islanders are one win away from a rematch with the Tampa Bay Lightning in the third round of the Stanley Cup Playoffs. Regardless of what happens going forward, the Islanders have, once again, defied the skeptics, the haters, the pundits.

How have they done it?

A power play that was mediocre at best for most of the season (February aside) has been on fire. Mathew Barzal and Kyle Palmieri scored some timely goals and of course, Adam Pelech cementing himself as one of the best shutdown defensemen since Zdeno Chara was in his prime almost two decades ago.

The players who we expected to show up have done so, but we needed more. Without rookie sensation Oliver Wahlstrom, someone else had to step up. Let’s be honest, Nick Leddy has disappointed. Regular season Leddy was a revelation; playoffs Leddy has been a liability.

Just like the Isles have surprised the “experts”, Scott Mayfield has surprised us all. Coming out of nowhere to save the day is Mayfield. Every fan’s favorite whipping boy during the regular season has played at a level nobody expected. Three months ago, there was chatter on Twitter about benching Mayfield for Thomas Hickey, Sebastian Aho, or anyone for that matter. There was talk that maybe the Isles ought to leave him unprotected in the expansion draft despite his very team-friendly 1.45m cap hit.

All that’s changed during the playoffs.

In fact, in Game 5, no defensemen, & no skater was on the ice more for the Islanders than Mayfield. At the end of the game, when the Isles were desperately trying to hold on to their 5-4 lead, it was Mayfield (and Pelech) who were on the ice and not Ryan Pulock. That’s not meant to be a criticism of Pulock, but rather high praise for Mayfield.  He’s earned Barry Trotz’s trust in the most important and intense moments.

Regular season Mayfield was fine – at 1.45m cap hit, he was an asset, but probably better suited to be a bottom pair defenseman.

Per Hockey Viz, you’ll see Mayfield was a liability offensively and while he wasn’t bad defensively, the team was actually worse with him on the ice. 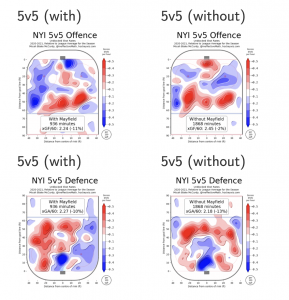 Even killing penalties, he wasn’t the Islanders’ best option. 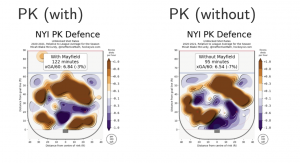 During the playoffs, Mayfield has been a completely different player.

His emergence has been one of the keys to the Islanders’ success during this playoff run. He’s shooting more, contributing offensively, he’s +8 and most importantly Trotz knows he can trust him with the toughest matchups.

Everyone develops at their own pace, but defensemen sometimes mature later than forwards. Playing defense is equal parts physical (athleticism) and wisdom. Because of this, you’ll often see the “light turn on” for defensemen later in their careers. At the tender age of 28, it appears the light is on for Mayfield. It couldn’t have come at a better time for the Islanders.

Previous Simpson: Heating Up? Bailey, Eberle, and Nelson Finding Their Groove
Next Taub: Islanders were relentless at every turn in Game 6 beatdown

Simpson: Heating Up? Bailey, Eberle, and Nelson Finding Their Groove
Taub: Islanders were relentless at every turn in Game 6 beatdown