Home / Home / What To Watch For: Islanders Training Camp Edition by Rob Taub

What To Watch For: Islanders Training Camp Edition by Rob Taub

Rob Taub September 13, 2018 Home, Takes Comments Off on What To Watch For: Islanders Training Camp Edition by Rob Taub 778 Views

It’s been an emotion-filled summer, but the 2018-19 season is finally ready to kick off for the New York Islanders.

The Isles will open training camp tomorrow morning for the first time without John Tavares and under the new regime of general manager Lou Lamoriello and head coach Barry Trotz. These past months saw an abundance of changes made from the top of the organization right down to the very bottom, all at the behest of Lamoriello.

All these new quirks — low jersey numbers, no facial hair, a more mentally tough team — were put in place to rebrand the culture and re-instill accountability in the Islander organization.

Now with veterans, rookies, some new blood, and a new coaching staff all chomping at the bit to get going, that culture shift and new found accountability will be on display. Even with those all those elements, there are still many questions that are facing this team as they embark toward their season opener October 4th in Raleigh.

Here’s what to keep an eye on in the next few weeks: 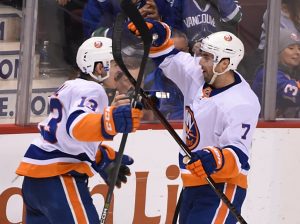 Ever since Tavares’ departure, much of the focus for the Isles and their fans has shifted to Barzal immediately becoming the number one center. But it’s the forwards who will be put on his right and left that will get most of the attention in the next few weeks.

Barzal developed wicked chemistry with Anthony Beauvillier and Jordan Eberle last season, even being the club’s most productive line the second half of the year. It might be unwise for Trotz to break up the “EBS N Flow Line”, but if that were his decision, 40-goal scorer from a year ago, Anders Lee, and Josh Bailey — who had a career-high 71 points in 2017-18 — could be worthy of first line roles. Before Barzal was matched with Beauvillier and Eberle, it was he and Bailey that played early in October and meshed well together.

Some other long-shot odds of who could be paired with Barzal: Andrew Ladd (who needs a bounce back season in the worst way), Josh Ho-Sang (his skill mixed with Barzal’s would be entertaining to watch), and throw Brock Nelson’s name in there — if he stands out throughout camp. 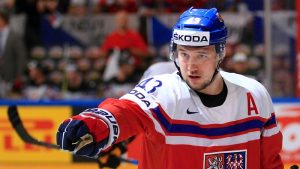 When Lamoriello signed Kovar during the summer, the feeling was that he was going to replace Brock Nelson, who was an RFA at the time. Now, both are signed and it could be either one of them who snags that number two role behind Barzal.

Kovar, 28, coming over from the KHL is notorious for his skill and scoring prowess. He thrived over in Russia and caught the attention of several suitors, actually deciding on the Islanders. It’s hard to base what Kovar brings to the table — and will certainly find out over the next several weeks — but he will be excellent competition for Nelson.

For Nelson, when Tavares left, he was instantly inserted into the second line center role. But with Kovar around, he will have to really take his game to new heights. Being on a make-or-break deal has to also be great motivation for Nelson, who is trying to rebound after his least productive season.

The second line center battle will be noteworthy heading in to the new campaign.

-HOW WILL THE BOTTOM SIX COME TOGETHER 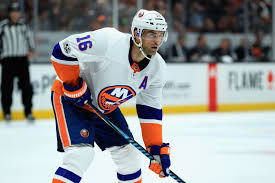 This is where camp will get hairy. The Islanders have an abundance of third and fourth liners with only six spots up for grabs. You can even say the amount of bottom-six forwards that will be fighting for a spot opening night can make up almost three lines.

Seriously though, with how putrid the bottom-six was for the Isles a season ago, seeing new faces — Kovar, Leo Komarov, Valtteri Filppula, and Tom Kuhnackl — battle it out with re-occurring players like Ladd, Casey Cizikas, Cal Clutterbuck, Ross Johnston, Tanner Fritz, and the now returning Matt Martin, is a breath of fresh air. Kovar from his days in the KHL, could be a proverbial third line center. Komarov and Filppula are veterans who bring a defensive mindset. Kuhnhackl played a solid part the past three seasons in Pittsburgh on their bottom-six with two Stanley Cups to his resume.

Ladd could get forced out of the top six with only one spot really up for grabs. Cizikas could bump up to a 3C role, but could stay with Clutterbuck to resume their roles as fourth liners. Martin and Johnston are your typical fourth liners who will hit and get under opponents skin. Fritz is an interesting case because he was serviceable in the second half of last season and he has way more competition to deal with in this camp than others in the past.

How all of those names form into the third and fourth lines will be of peak interest. It’s hard not to think that the “Best Fourth Line In Hockey”, composed by Martin, Cizikas, and Clutterbuck wouldn’t be put back together, but Trotz might have different plans for the trio.

Whatever line combination, the bottom-six of the Isles throw on to the ice will have the new elements Lamoriello and Trotz want — defensively responsible, physical, and some snarl.

–DOES DEVON TOEWS FIND A TOP-4 SPOT ON THE BLUELINE 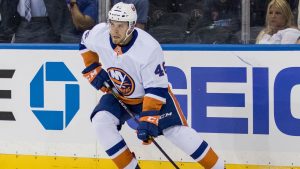 Devon Toews came oh so close to stealing a spot in training camp last year, but found himself back in Bridgeport for the year. Following that, he was hit by an unfortunate shoulder injury in December that ended his season.

Now, Toews is healthy and eager to be on the roster for opening night.

With Calvin de Haan now in Carolina, and Adam Pelech and Scott Mayfield more likely suited for a final pairing role, Toews’ chances of cracking the top-four on defense is high. The 2016 fourth rounder been the anchor in Bridgeport the past few seasons, only continuing to get better. And with the Isles set to take on a more defensive mentality, Toews seems like the perfect candidate to provide that balance while the top three — Ryan Pulock, Nick Leddy, and Johnny Boychuk — produce offensively.

Toews made the wise move to sign for below value this summer to prove to himself and the team he’s worthy of being a regular in the NHL. That shows he’s hungry and training camp will prove if that role will come to fruition in the near future. 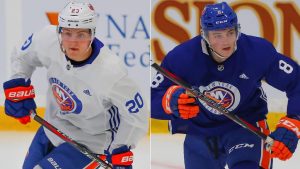 All four of these young men are coming into camp with a ton of hype, and for good reason. Ho-Sang, Bellows, Dobson, and Rathgeb all will get their chance to show the coaches and the management staff that they deserve to be on the roster as the season gets underway.

For Ho-Sang, it’s very simple: A new slate. The 22-year old said he has no expectations for himself and that he’s ready to listen, which shows he has a fresh perspective.  All the skill and the craftiness is there, but it’s him improving without the puck is what will have to stand out. A top-six spot seems out of the question, but looking at the competition Ho-Sang will have to beat out does seem to favor him. This is a monster camp for the 22-year old.

In Bellows case, he’s said his goal since his time at rookie camp back in late June was to make the team. And he will definitely get his opportunity. He’s coming in after an excellent season in Portland in the WHL and his outstanding showing for Team USA at the World Juniors back in January. Bellows improved skating added to his big body and elite shot makes him one of the bigger names to watch. The Edina, MN native has all the tools to be a top-six talent, but just like the rest of the pack, he’ll have to outshine to win a spot.

Rathgeb, the last addition of the Garth Snow regime, has received a great amount of praise from when he first arrived on Long Island in June. Technically a veteran — from his playing days over in Switzerland — Rathgeb knows what he will have to do to make the team. Where Rathgeb might have trouble, is the number of defensemen the Isles consume all trying to secure their own place on the blueline. If what Rathgeb has demonstrated continues, he could be the biggest surprise in camp.

Finishing up with Dobson, you don’t see many number 12 picks that have impressed in such a minimal amount time he’s been apart of the Isles organization. Nothing but good things have been said about this kid from the time he was drafted to his performance at rookie camp and the World Junior Showcase for his native Canada. To see Dobson make the squad this season — even if it’s only for the nine-game tryout — would be a coup to how sturdy he can be and how much better the Isles defense will be in the future. It might be a bit of a stretch based on how many other young d-men will be battling for a spot, but Dobson’s size and presence might be what takes him over the top.

Previous Brasqo: Rulings And Numbers And Hairs, Oh My
Next PTIsles: Episode 51 – There Is No Aftermath

Brasqo: Rulings And Numbers And Hairs, Oh My
PTIsles: Episode 51 – There Is No Aftermath