Where to Call Home?

There are many questions about where the New York Islanders will play their hockey games long term.  As noted this week during an interview on the NHL Network Jon Ledecky remained committed to Brooklyn and Barclays Center but kept the door open for changes down the road.  He noted”Even if one was to surmise that a new arena was being planned, that would take a long time in the New York market,”.  Ledecky sounded like he was exploring other options but was at the early stages of this process.  He continued to praise the partnership with Barclays Center “Barclays Center is a first class facility, and it’s our home,Barclays Center management has been very receptive in helping up to improve the fan experience. So I think it’s interesting to read press accounts (of the search for a new arena), but Barclays Center is our home.”  Barclays Center is the Islanders home and they will be happy to remain in Brooklyn but that does not mean they are not exploring other venues.  As of now they have four main ideas, first being to stay in Brooklyn, second returning to Uniondale, and finally building a new arena in either Willets Point or Elmont.

Plan I: Remain in Brooklyn 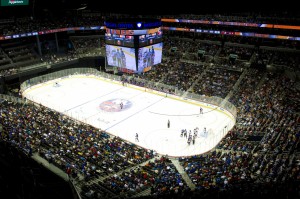 Let’s start with the most logical landing spot for the Islanders, the Barclays Center in Brooklyn.  Since they are already under contract many times status quo is easier than change.  From a fans point of view we have seen plenty of the negatives already.  The biggest negative to Brooklyn is the transportation and distance issues.  The most vocal part of the Islander fan base is still in Nassau and Suffolk counties so any trip into Brooklyn is seen as a trek.  Due to its location deep in the heart of Brooklyn driving in does not seem like a truly viable option.  Being accessible to only one highway (the ever popular BQE) makes it more difficult to drive along with an almost no existent parking situation.  Taking the train is not fun either, as most fans taking the LIRR would have to change in Jamaica to continue onto Brooklyn.  There is little worse than having to wait outside at a train station at night waiting for a connecting train.  This is a problem that ownership is aware of and while it was a vague line Ledecky did mention that transportation from Long Island was something they are working on.  Though if you are a New York City resident (a fan the Islanders are actively wooing) this is a great location, in addition to the LIRR, ten subway lines are within a few block walk of the Barclays Center, it is truly one of the most accessible locations in New York City.

The other negatives have to do with the building itself.  Unless a major retrofit is done (which is all but off the table according to Barclays Center) it is a terrible building to watch a hockey game.  The game is completely unwatchable from one side of the rink.  Yes, it works for fans who want the feel of the game but watching the game is a huge part of attending.  The rest of the building does not set up much better for hockey.  The biggest joke in the league last year was the scoreboard being over the blue line and the YeSUV being in the corner.  I may take time but it feels at least to me like its someone else’s (Nets) building.  It does a great job of trying to be authentic Brooklyn but that’s not the Islanders.  I would like to think that over time it becomes normal but as of now I’m not sure.

That is not to say that downtown Brooklyn is not a great place for a hockey team.  One thing Islander fans have never had until last year was the opportunity to hang out before or after a game.  Unless you love Champions Bar and Grill at the Marriot or had time to tailgate, you had to get in your car and drive somewhere pre or post game.  In Brooklyn that is not a concern.  From the moment you arrive into Atlantic Terminal there are tons of options to enjoy a full night out.  If you are not adventurous you don’t even have to walk outside, an Applebee’s, McDonalds, and a Buffalo Wild Wings are connected to the train station.  New York icon, Juniors is a five-minute walk away and another icon Shake Shack is literally across the street.  That does not include many of the other fine establishments in the neighborhood (like my favorite Dinosaur BBQ).  If you want to make a day or night of the game the options are available to you.   No other option comes close. 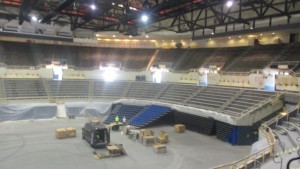 The least likely (talked about) option is a return to Uniondale.  With the renovation of the NVMC there has been talk that the Islanders would like to return to its home.  Unfortunately, that ship has sailed, to me it seems like nothing more than political grandstanding.  It is very easy for politicians to say the Islanders should play in this new building without having to make any agreements with anyone about it.  Many fans are holding out hope but don’t count on it.  A homecoming would not be perfect for fans though.  Transportation issues are still there as with any location.  It is almost impossible for fans from New York City to come to an Islander game.  So just how fans in Nassau and Suffolk felt alienated this year, City fans (and they exist) would be alienated and that is not something the Islanders have the ability to do.  Let’s be honest, it was always in a crappy location, you can’t get to it from the LIE, or the LIRR.  It puts tons of pressure or roads that do not have the ability to handle the traffic.  Nostalgia and habit have made many of us overlook these facts.

The building would not be a great one, it will basically be a cleaned up version of the NVMC, and we will be looking to leave it again soon enough.  After seeing some of the amenities available to fans, Doolin’s is not going to cut it anymore.  The seating will be limited as they are not making any changes to the foundation of the building.  A return to the NVMC will be a return to complaining about the NVMC.

The next two plans involve building a completely new arena with the Islanders as the main tenants.  While many people feel that an arena is not needed in either Willets Point or Elmont, we will ignore that question and instead continue to focus on how it will affect us, Islander fans. 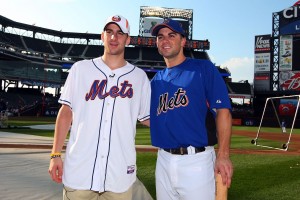 There has been a persistent rumor of an arena being built in Queens at Willets Point.  This would be behind Citi Field.  In addition to the arena being built there would be other businesses opening up as part of the Willets Point revival process.  While it is unknown what type of restaurants, bars and retail locations will be built, there will be options available to those going to the game.  The biggest advantage would be it being a brand new hockey first arena.  For the first time in Islander history, they would be playing their home games in a state of the art arena.  That would include many amenities that make it nicer as a fan to go to an event.  Better food options, lounges etc. would lead to a higher class experience then at the NVMC.

Since many fans already travel to Mets games, this trip is already familiar to much of the fan base.  Nobody truly complains that the Mets don’t play on Long Island, but it is still not the best location in the world.  It is deep in the heart of Queens but accessible by both highway and railway.  Though unless major roadwork is done it will be a hassle to get to both the train station and highways.  The LIRR station to Citi Field is already a half mile walk and it will only be further to the arena.  Getting here is doable but nobody is excited about it.  The biggest benefit for Long Island fans is its perceived to be easier than Brooklyn and driving is an option. 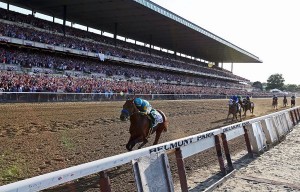 The last option is building at the Belmont Racetrack.  This seems like the compromise location.  It is technically in Nassau County but basically on the Queens County line.  Many Long Island fans can drive to games.  It being located right off the Cross Island (with entrance and exit ramps already in place) allows drivers to reach it from almost any east west roadway.  The other advantage is an LIRR train station is already built for fans either from the city or who want to take the train.  Since Belmont is its own line the LIRR can be creative with the schedule to optimize coming and going to the new arena.

As with the Willets Point arena, a brand new state of the art building has plenty of advantages.  As of right now though, this project does not seem to be coming with additional businesses tagging along.  The Islanders would have to do like other building in the area and create an environment where showing up early or staying late is part of the event.

The first priority needs to be finding a long term home for this organization.  The constant talk about where they will play their games has surrounded this team for over a decade now.  The best solution may be for them to get their own building that Islander fans will take pride knowing it’s our home.  Everything else will need to fall into place, it must be accessible to all fans whether they are on Long Island or in New York City, and it would not hurt for there to be a nice place to eat before or after the game.