Wilde Card In The Mix

When draft night arrived two months ago, Bode Wilde was one of the premier defensemen expected to be a top selection.

As the first ten picks were announced on that Friday evening, the thought was that he would hear his name called at least before the 15th overall pick — owned by the Florida Panthers. That was not the case. Teams made their selections, one name after the other coming off the board, and before anybody knew it, the first round had concluded without Wilde being taken.

Many were stunned that Wilde had not been selected, considering that before the draft, he was regarded as one of the best d-men in his class that featured Rasmus Dahlin (he would go number one overall), Quinn Hughes and Adam Boqvist (went seventh and eighth), Evan Bouchard (tenth overall), Noah Dobson (fellow Islander pick who went 12th), and Ty Smith (selected by New Jersey at 17). The 18-year old headlined the defense for the U-18 squad in the USNTDP program and led all d-men in points last year with 41 points in 61 contests.

With the second round commencing and his name yet to be called, there stood a chance that Wilde could possibly fall to the Isles who had both the 41st and 43rd pick.

Four more defensemen were taken before the Islanders were on the clock, and none of them were Wilde. With him still available at 41, Lou Lamoriello and Co. couldn’t afford to let Wilde slip to another team. They selected the Montreal native with their pick, and in essence, snagged a top-15 talent at the beginning of the second round.

Right away after Wilde was drafted to when he arrived for prospect camp on Long Island, it was easy to spot this kid had a chip on his shoulder. “That was definitely a goal of mine to go in the first round,” Wilde told Newsday back in June. “I was disappointed when that didn’t happen. But I just had to get over that and get excited for Day 2, and I really was. It kind of lit a fire inside me just to kind of prove people wrong and get to where I want to go. I’m just taking it day by day and try to make those others who passed up on me regret it.”

No one knows more about that chip on Wilde’s shoulder than the person who’s observed him the most, Seth Appert. Appert, is the head coach of the U.S. Under-18 National Team for the U.S. National Development Program and he has been keeping tabs on Wilde since his days playing U-14 hockey.

“All great athletes have a chip on their shoulder, even if it’s a fake one,” Appert said during a 20-minute phone conversation. “Bode expected and a lot of people would argue, earned the right to be a first-round draft pick. For whatever reason, he fell. And he still went high, but he fell lower than he wanted.” 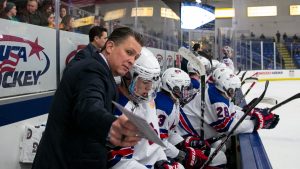 Once the Islanders drafted Wilde, Appert recalled speaking with him that same day and that Wilde expressed that he was going to use those teams who snubbed him as fuel to drive him to work harder and prove those clubs that he should have gone higher than 41.

Now when Wilde was falling on the first night of the draft into the second round the next morning, several hockey critics pointed out that “attitude issues” were the main cause of why so many teams were passing on him. There had to be some proof to the pudding because to go from a being a top-ten talent to falling all the way into the next round does sound a bit odd. Appert does feel that the whole attitude dynamic was blown somewhat out of proportion.

“Every year, there’s always a player or two, they start trending in the wrong direction. People start saying things for whatever reasons, and things start to take on a life of its own,” said Appert.

“Bode had a great season for us. He was fantastic. And if the NHL Draft was in March instead of June, he’s probably a top-15 pick with how good he played in the Five Nations Tournament. He was dominant in that tournament. At the U-18 Championships, he wasn’t as good as he normally would be. He wasn’t poor, but those two weeks probably didn’t go as he’d hoped. That’s when people started wondering why and searching for reasons why.”

Despite that uncharacteristic showing from him in that tourney, Appert found there to be no issues with Wilde’s attitude both on and off the ice. He praised Wilde’s work ethic, how he approached coming to the rink every day looking to get better, and how he was a very coachable player.

A week or two before the draft, Wilde had made the decision to de-commit from the University of Michigan to forgo playing in the OHL for the Saginaw Spirit — they drafted him back in 2016. Some possibly saw this as maybe another indictment on why he might have fallen, but Appert– even though as a part of USA Hockey has the utter belief that college hockey is that way to go — was behind Wilde’s decision and thinks he will benefit on a whole other level.

“The path doesn’t define the player,” he proclaimed. “The player, it’s his work ethic and inner drive that’s going to define who he becomes. Bode made that decision. Doesn’t matter that I think college is the great route. Bode decided this was the right route for him. We’re going to continue to support him and hope that he becomes the player we all want him to become.”

With Wilde’s size, 6’4, 198 lbs, some would think that he has a bit of an advantage on possibly transitioning to the National Hockey League faster. But now going the junior route, it’s continuing the path he put himself on this past year of being smart with his decision making and risks he takes as a player.

Appert pointed out that especially at young ages, those great offensive defensemen always want the puck — Wilde did have 15 goals last year.

“They want to hold it (the puck) a little longer, they always want to beat that guy,” said Appert. “That’s when Bode or any other young d-man get themselves in a little bit of trouble. I think that as he continues to mature his game like he did this year — where he made great strides — it’s going to be more not making the big play, but making the right play. If he continues to get better at that like he did last season, the sky is the limit of what he’s going to become.”

Being that he was a projected top first-round pick and ending up where he fell to, it’s easy to project that Wilde could see the NHL sooner than in the distant future. And with the Isles coming off their worst defensive season in ages and the need to get younger on the blueline, maybe he makes a splash and finds himself on the roster within the next season or two. In Appert’s eyes,  many factors that would have to fall into place for Wilde to see the varsity any time soon.

“It’s not just about the player being ready,  but it’s also about the organization having the right opportunity for the player that allows him to develop in the way he needs to.”

Just recently, the U.S. National Team held its World Junior Showcase. While fellow Isles picks Oliver Wahlstrom and Logan Cockerill received invites, Wilde did not get the call. That does not mean that Wilde is being ruled out to be one of the members for Team USA in Vancouver this December. According to Appert, Wilde is being considered as a strong candidate for the squad along with Wahlstrom.

Speaking of Wahlstrom and what makes him so special, Appert commended him as a world-class goal scorer and that his game is more well-rounded. He also hammered home the point that he has the body to withstand NHL play and the strength to be an elite power forward.

Wilde is going to be a part of the Islanders rookie camp next month and will take part in the team’s training camp. What many fans and critics don’t realize is just how special this young man has the potential to be.

“Bode’s real mobile, is a right-handed shot, and an offensive defenseman with has a physical knack to his game” Appert voiced. “Those kinds of players don’t grow on trees and they don’t exist in today’s NHL. That should have Islanders fans very excited.”